I had been looking forward to the final WeBS count of the year. Duck numbers had been building, and a cold spell forecast for the days before increased the chances of encountering some of the scarcer wildfowl. As the weekend drew closer the weather forecast was updated to include heavy snow on Sunday. Whilst rain is a mere inconvenience on a count, snow is a big problem, because it can completely obscure the visibility. I also found myself coming down with a heavy cold, so I ended up dragging myself out of bed early on Saturday to get the count done. As it happened we didn't get much snow on Sunday after all, but there we are.

Arriving at the car park I got an unusual sense of barren-ness, but soon twigged that it was because the hedges had been cut low and so you could see out and across the field opposite. Scanning across the Little Broad I picked out a Kingfisher, always a good start to the count. There were few Tufted Ducks or Gadwall here, but there were five Shovelers at the east end. 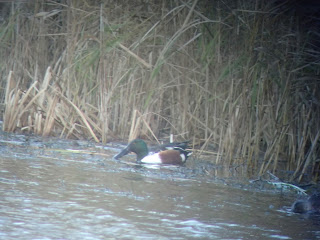 Moving across to the Great Broad the highlight of my visit came when a Stoat scampered across the path near the ruins of Trowse Newton Hall. This was a rare sight here (not surprising given how well used the site is) - my first since 2012. Despite the cold weather there was nothing out of the ordinary, not even a Goldeneye. Justin counted Thorpe Broad simultaneously as many of the birds along the western shore wouldn't have been visible from Whitlingham, so these species counts are our combined counts:
To summarise, Gadwall numbers very similar to last year and Aythya numbers reasonably close too. The increase in Teal is likely to be as a direct result of the spell of cold weather, bringing extra birds in and also making birds that would have otherwise been out of sight on small pools into the open water. The key difference then is the Coot, with less than half of last years count. Going back to 2015 the December count was 264, so clearly there is a good deal of variance, but by either count this year looks like a poor one for Coot.