On Wednesday, Ricky & I travelled to Rockland to meet up with Jim. Before heading to the New Inn for a pint and a catchup we decided to have a look on the broad and marshes, before waiting to see if any harriers would come in to roost. There was an early highlight when we saw a white Muscovy Duck at the staithe, one of a local pair. Obviously this was tinged with worry about where the other one was, but we found it herding Moorhens in a field nearby. 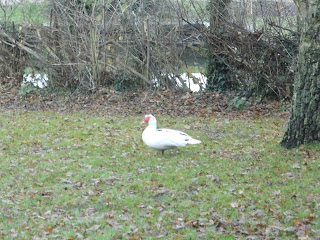 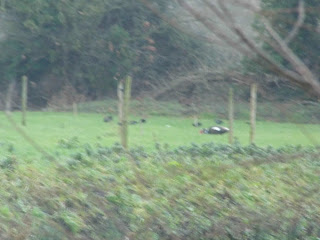 In the scrub by the path a Chiffchaff called and we could hear a Redpoll flying around close by but unseen. A dead Chinese Water Deer was lying on the marsh but there was no sign of any interesting scavengers. Further along a Woodcock flushed from a belt of wet woodland and flew out onto the marshes. Where the dyke joins the broad we stopped to scan the open water. I said how rubbish I found  Rockland Broad for ducks, which undoubtedly helped Jim pick out a smart drake Goldeneye.

Walking down towards the river the light began to fade, and mist obscurred our view beyond the trees. A Tawny Owl had called distantly, and a Marsh Harrier flew past, but otherwise we were entertained by two Chinese Water Deer chasing each other and the constant pinging of Bearded Tits from the reeds behind the dyke. We headed back to the village for an enjoyable drink and snacks, having had a very pleasant evening out.
Posted by James Emerson