Rockland Broad has a decent track record of attracting Black Terns and Ospreys without the visitor numbers of some of the larger nature reserves, so me & Cathy decided to have a look round on the off chance. We didn't have much luck (although I wasn't too far off, as there was a mini Black Tern influx around Norfolk the next day), but did come up with some insect highlights, including first Red Admiral and Large Red Damselflies of the year. Despite walking along the channel to the river there was no sound of any Bearded Tits. On the adjacent marshes we saw a couple of Chinese Water Deer and a Weasel. 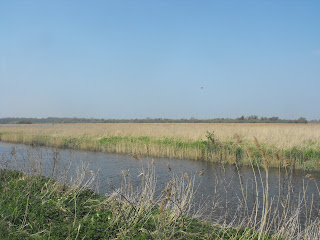 The reedbed west of Rockland channel
Posted by James Emerson