The temptation to go to the coast is growing, but as it seems like a few more birds are turning up locally I decided to try Thorpe. I'd barely crossed the bridge over the railway when I heard my first Sedge Warbler of the year singing from the reeds adjacent to the railway line. Further round three Little Ringed Plovers were squabbling on the scrape, although when not calling they were elusive, spending large amounts of time behind clumps of vegetation. A chat with one of the locals revealed that the Sedge Warbler had arrived three days ago, and he had also heard a Grasshopper Warbler from Bungalow Lane. Despite loitering a while I couldn't hear the Grasshopper Warbler, but I did see an Orange-tip, bringing the butterfly count up to 8 for the year so far, and another Sedge Warbler. 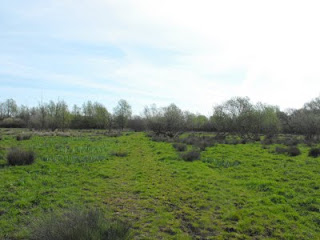 Thorpe Marshes in the sunshine
Posted by James Emerson