I sometimes wonder what happens to vagrant species that turn up in the UK. Some probably re-orientate themselves and go back to where they should be. A few stay (e.g. "Sammy" at Titchwell) whilst others probably snuff it (e.g. The Hume's at Wells this winter). The majority just "disappear", often shortly before I decide to go and have a look. I was concerned that the Short-toed Treecreeper at Landguard would depart before the weekend, but I had one thing in my favour - North of Landguard is Ipswich, and South is the sea. Faced with this tricky choice, it had decided to stay a while.

Neil had offered me a lift on Saturday morning, and we made good progress as we headed south seeing 4 Kestrels, 1 Swallow, 1 Brimstone and 2 dead Badgers. First impressions of Landguard were positive, a cracking duney piece of land. We walked amongst the Linnets over to the bird observatory, learning from a departing birder that the treecreeper hadn't been seen yet. Seeing that all of the birders were standing in one area, we decided it would be prudent to check the small trees along the northern side of the fence. When this drew a blank we looked up, and found all of the birders were gone. As neither of us had been drinking, we took this to mean that the bird had been relocated, and continued walking along the compound.

It turned out to be a case of "right place, right time". We walked up and were immediately put onto the Short-toed Treecreeper low on a Holm Oak trunk. We then watched it fly between several small trees before getting even better views as it slowly made its way up the trunk of a bare tree inbetween the two stands of Holm Oaks. Rather than follow it along the fence we waited near this tree in the hope that it would return, but instead it headed off into the denser oaks (viewing appeared to be possible if you pressed yourself up against the fence. I didn't try it). A sunny and successful twitch, giving me my first lifer of the year. Rather than attempt to take a typically poor digiscoped record shot I spent all my time looking at the bird. In order to prevent this post being too dry, I have created an artist's impression of the scene for you. 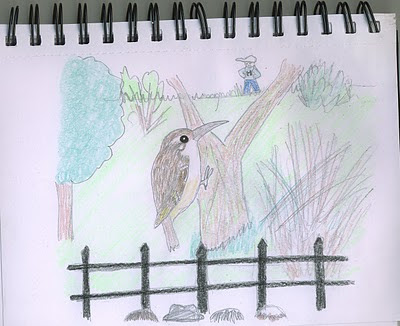 It's almost like you're there...
Posted by James Emerson