I spent the day around various villages near North Walsham. After lunch at the Butcher's Arms in East Ruston we then went to Swafield Church, had a walk around Bradfield, had a look along the seafront at Walcott, bought some jam at Ridlington, walked around Crostwight Heath before ending up at Edingthorpe. The birding highlight of the day was a Red Kite hunting over fields between Honing and Briggate, whilst a Yellowhammer at Bradfield is probably (and sadly) of note these days.

I had hoped to find some Green Hairstreaks at Crostwight, but it was immediately apparent that the site was just too gorse-covered. We did however discover an Adder and six Grass Snakes, one of which had been runover. When looking at the Grass Snake picture (click to open it in a new window) notice the head to the left of the main body. It had raised it into the air and was "tasting" the air by tongue flicking until it got bored of us and slid off. 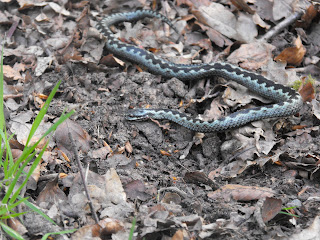 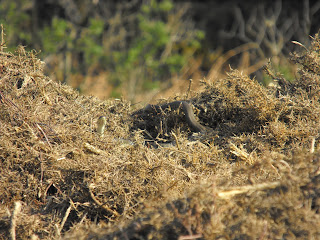 Email ThisBlogThis!Share to TwitterShare to FacebookShare to Pinterest
Labels: Snakes