WHITLINGHAM: Just because its spring and I have some time off


With no particular birding targets in mind but knowing you've got to be in it to win it (or something like that) I went for another wander around Whitlingham. Listening out for anything giving out of the ordinary calls I was disappointed, although I did hear a couple of Sedge Warblers that hadn't been there last time I looked. Another birder was at the birdscreen - I can't remember the last time that happened but it was a few months ago. As we stood there 15-20 Sand Martins flew overhead, a welcome return. A couple of Lapwings were on the spit on Thorpe Broad, but I'm still missing Shelducks from here this year.

Walking along the south shore a lone Swallow broke from the Sand Martins and headed off over the woods, but my eye was drawn to a bird making "Marsh tern-like" swoops over the broad. A closer look showed it to be a Little Gull. It was in 1st winter plumage, although the black on the outer tail was restricted to the corners, with white in the middle. I didn't remember noticing this on previous 1st winters, but its probably just me paying more attention than normal. Having consulted Malling, Olsen & Larsson it appears that some 1st-winters moult the central tail feathers into adult plumage, so now I know! I stopped in to tell one of the Broads Authority guys at the barn it was there, then had a final sweep of the meadows, which remain Yellow Wagtail-less. Upon checking my emails this afternoon I found out that there was a Wheatear at Thorpe yesterday (seen by Ricky - check out his blog, now in the links column under "Shaky's Birding Blog"), so maybe it still isn't too late to add Wheatear, Ring Ouzel or Yellow Wagtail to the patch list! 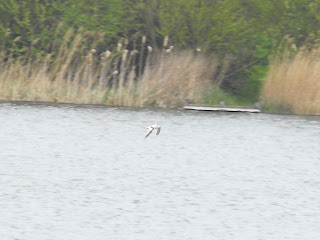