8th April 2011
A bright and warm evening at Whitlingham had the feeling of mid-summer about it, not least because we are still waiting for a mass arrival of migrants. Four singing Blackcaps, including one confiding male along the south shore of the little broad, have joined the Chiffchaffs, and a lone Willow Warbler was in the conservation area. One of the Egyptian Goose chicks from last week appears to have died, not helped by the fact that one parent appears to be absent. The rest of the country park was bird-light, although I may upload a picture of a Treecreeper that flew onto a tree right beside me later. I was cursing the lack of hirundines, but managed to locate 13 Sand Martins (and a Sparrowhawk) over the meadows opposite the country park. Initially the martins were too high to see with the naked eye, and it was pure luck that I found them whilst scanning the soaring Jackdaws. Evenutally they came a bit lower, but still showed no inclination to go towards the water. 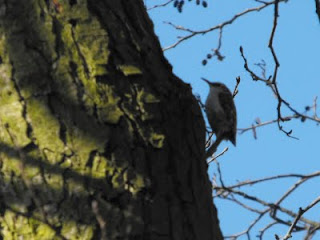