On Saturday morning I attended a moth morning at Catfield Fen. Catfield is Butterfly Conservation's only Norfolk nature reserve, but in order to protect the sensitive flora and also because the boggy areas are dangerous to walk in there is no general access. This means that events such as this one where traps have been placed out on the reserve and then brought to a communal meeting area are the only way of seeing some of the interesting moths that occur here. I had been to one moth morning here before, but that was in June and the weather wasn't very good, so I was hopeful that I would see some new species.

A group of around 25 people were present, and represented a mixture of experienced moth-ers and relative beginners. Mick A'Court had put out seven traps for us, which we went through one after the other. The commonest moths were Striped and Southern Wainscots, plus things like Buff Ermine and Cyclamen Tortrix. One of the hoped for reed specialist moths, Reed Leopard, came out early, and in total ten of them were seen. 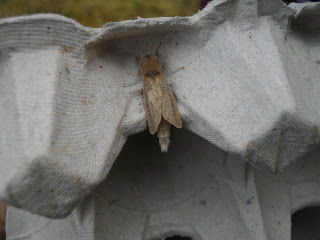 One of the more attractive fenland specialties was Lempke's Gold Spot, which looks subtely different to Gold Spot. There were four in the traps, all Lempke's. Dotted Footman and Dotted Fan-foot were also good fenland species, albeit ones I had seen before. The rarest moth was probably Silver Hook, which was new to most people there. Other new moths for me included Cream-bordered Green Pea, Figure of Eighty and Minor Shoulder-knot. 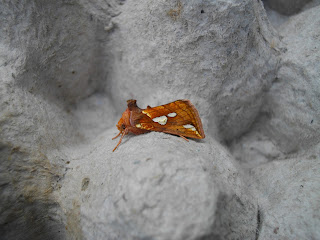 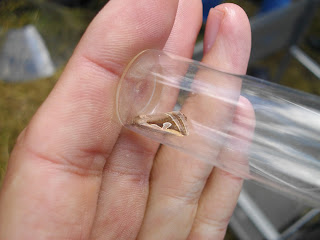 As the trapping drew to a close we were able to watch a Swallowtail butterfly flying over a small meadow behind us, landing occasionally at thistle flowers, perhaps one of the last of the first brood for the year, although there may be another brood emerging in early August.
Posted by James Emerson