On nice hot summer days lots of people choose to go to the beach, whilst another big chunk of the population choose not to go to the beach in order to avoid the first lot. I'm not a big fan of lazing around on the sand, but there is a lot of coastal wildlife, so there are sometimes good reasons for getting close to the sea. On Monday Cathy & I headed to Felixstowe, a town I'd not properly visited before (I had been through it several times on the way to Landguard).

The reason for our visit was to look for Wall Lizards. This non-native species of lizard is present at a number of sites across the country as a result of introductions (deliberate or accidental). No-one seems to know how the Felxistowe Wall Lizards got there - it could be that someone released them, but they could have also been brought across with plants, or even arrived via the port. Surrey Amphibian and Reptile Group monitor populations of Wall Lizards across the UK, and suggest that these ones have been present since at least 2007, and young have been observed so it is a proper population rather than a few stray adults.

Not knowing how close we would be able to park to the Pavilion Gardens we left the car along the seafront to the south, and walked along the promenade towards the gardens. I hadn't realised how long a stretch there was, made up of about eight sections of garden. There was nothing for it but to wander through them, keeping an eye on the rough stone walls for lizards. Over half way through we only had a spider-hunting wasp to show, and Cathy asked if I'd be annoyed if we didn't see any lizards, but luckily this became immaterial as I found one. It was basking on a low stone wall, and once it spotted us soon ran off - unfortunately on hot days reptiles are very skittish. It was quite greenish, although this didn't show up in the photos. 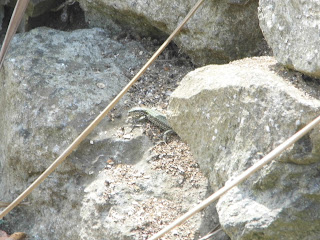 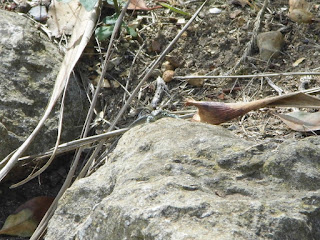 Having successfully found a Wall Lizard, we then walked back along the seafront to the car, getting some ice cream and chips on the way.
Posted by James Emerson