I had originally intended to go to Catfield Hall Fen with the NNNS on Sunday, but was asked if I could help at a Little Ouse Headwaters Project bioblitz at Blo Norton, so I went there instead. Blo Norton is right on the border between Norfolk and Suffolk, indeed the Little Ouse river forms the county boundary to the south west (the river Waveney has a source close by and forms the border for much of the eastern part). On the way down there was torrential rain, and the day continued to be interrupted by showers, hindering our recording effort.

On the outskirts of Blo Norton I noticed a Turtle Dove, and pulled over to have a better look. Whilst watching the dove a Barn Owl flew past, so a positive start at least. Having signed in at the village hall, which was being used as a base for the day, I headed off with a couple of other naturalists to Betty's Fen, the closest LOHP site. We spent some time in an area of wet woodland before the site opened up into a reedy area. Unfortunately the riverside path was completely flooded, so we had to retrace our steps. A brief spell of sunshine brought out a few insects, but no butterflies. 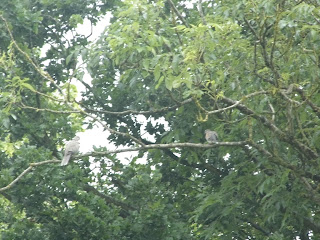 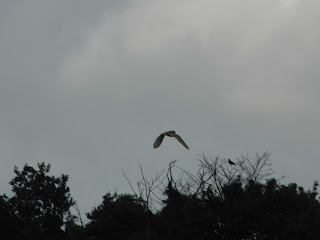 We decided to continue along Fen Road and try the next path, which runs between Betty's Fen and Blo Norton Fen. This path was boardwalked, so we got along it OK, but at the end it joined the same flooded path, so in the end we turned round to go back. Heavy rain forced us to shelter, and as it continued we had to just accept getting wet. We did record a few insects during the dry spells, and interestingly but sadly saw the fruiting bodies of Ash Dieback. Back at the village hall we had a welcome cup of tea and had a look at some of the moths caught overnight, including my first Sharp-angled Carpet. 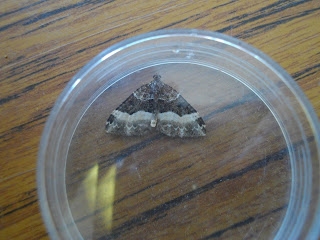 With about 45 minutes left before I had to head back to Norwich one of the other naturalists suggested visiting Broomscot Common, which should be drier. This common has a large heathy area, although as luck would have it the path to it was waterlogged. Nevertheless it was a productive stop, seeing Wild Clary, Gorse Shieldbug, Yellow Brain fungus and a range of other species not seen near Blo Norton. In total I recorded around 100 species, including quite a few plants, and visited some new sites, so a productive day. 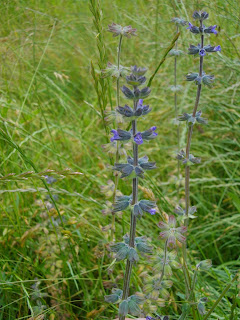 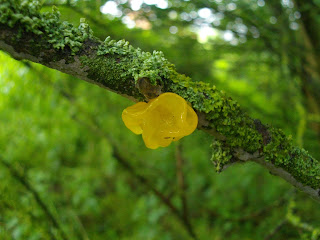 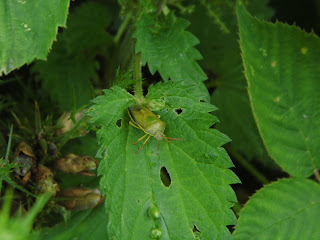