One of Cathy's aunts has been staying with her mum this week, and they had asked if we could go out for the day and see some wildlife. Rather than go to the coast, which would probably be packed with sun-worshippers, we went to Sculthorpe Moor. There were relatively few visitors, although the Hawk & Owl Trust were having a party for their volunteers in the visitors centre.

There weren't many birds visible on the first section of the boardwalk, although a couple of Marsh Tits were coming to the feeders at old gits corner. We stopped a while on the bridge over the stream, and further along I noticed some ripples. Suspecting a Water Vole, I moved position so that I could see past some overhanging vegetation to the source of the movement. To my surprise it turned out to be a Woodcock! There was enough distance between it and us that we could all watch as it bathed along the stream edge, stretching and occasionally flapping. A very unexpected but pleasing sight. 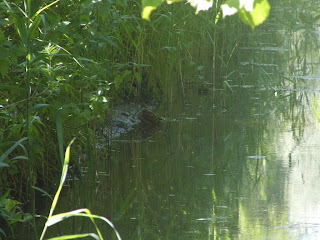 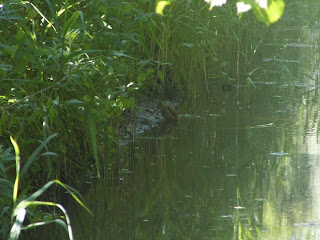 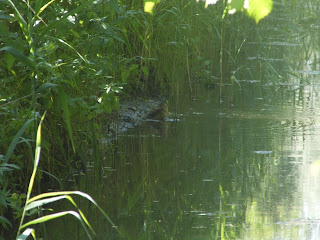 Along the river we watched Emperors and Four-spotted Chasers disputing territory, with Large Red, Azure and Blue-tailed Damselflies amongst the vegetation. At the next hide along we watched a family of Collared Doves on the bird table and a Buzzard flew over. Cathy was enjoying watching some small fish spinning side one, showing a silvery gleam, until a Little Grebe came right up to the hide and started eating them. 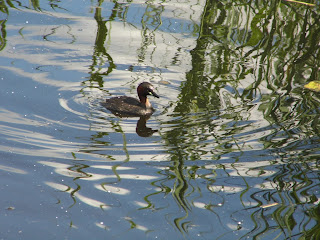 On the way back Cathy was carefully watching the boardwalk as she had found several small frogs and toads earlier. This time she found something more unsusual, a Sausage Ground Beetle*. As we got back to the car I noticed a pale cream coloured ladybird. It turned out to be a 14-spot Ladybird, which I see quite regularly, but usually with a deeper yellow colour and with some spots joined up. 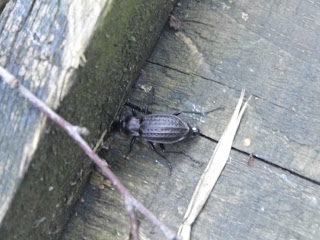 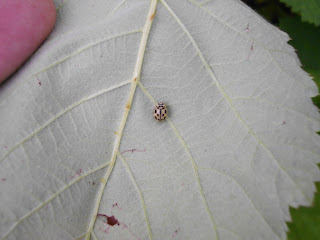