I've seen a few interesting invertebrates around Norwich in past week or so. Firstly this spider ran across my desk at work. I recognised it as a jumping spider, but it wasn't black-and-white like the common Zebra Spiders that are often found on brickwork. I took a closer look and identified it as Pseudeuophrys lanigera, which Pip Collyer the county spider recorder agreed with. Looking at the Spider Recording Scheme page, TG20 (i.e. the 10km square containing Norwich) is the only Norfolk square where this species has been recorded since 1992. Pip suggests that rather than it being rare, there are just a lack of people recording spiders in the county. 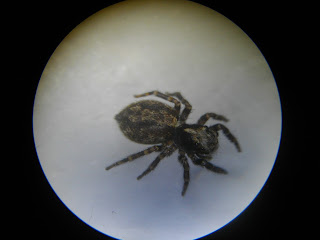 On Tuesday I was walking home past the Surrey Street entrance to the bus station and noticed a Wasp Beetle resting on the trunk of a Plane tree. Having not seen one for years I've now seen several in the Brecks and then this one in the same month. A few days later one turned up at home too, but macabrely it was dead and the head was missing, presumably eaten by a predator. 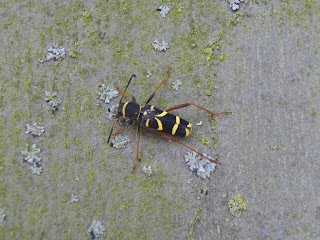 On Thursday I returned home to see a Pine Ladybird on the wall near my front door. We also saw these here last year, so I wasn't surprised to see it, particularly as I had found out that they are actually associated with Lime trees, which we have close by. 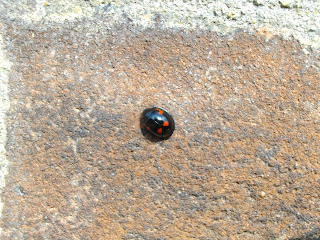