For the unprecedented third and final part of my Fermyn trip, here are some of the non-butterfly species we saw on Sunday. If there is a moral here, it is that many presumably common species of insect away from the really popular groups (butterflies, moths, dragonflies) are under-recorded! Based on the NBN data one, possibly two of the species I saw are county firsts for Northamptonshire, whilst several others are new 10km square records.

Our day begun at Carl's house at Hungry Hill, and as we had a look around the garden I noticed some interesting looking flies on lily pads that were floating on his wildlife pond. I photographed them and was able to identify them at home as Poecilobothrus nobilitatus, which seems to have no TG23 records. Later in the day I found the same thing again at Fermyn, which again has no NBN records. 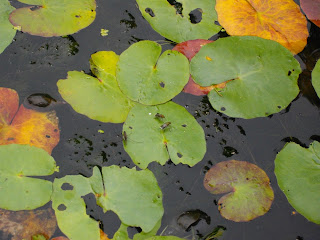 Last year I began to look more carefully at hoverflies, and there were several new ones for me at Fermyn, including Chrysotoxum caustum, which Cathy persisted with after I had thought it might be a wasp. Melangyna umbellatarum and Meliscaeva auricollis were also new. Volucella inflata is a species that I found near Norwich last year, but looks like its new for the Fermyn 10km square. 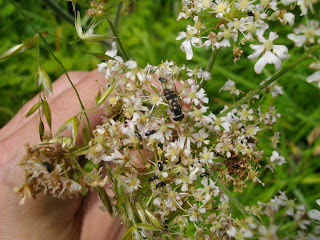 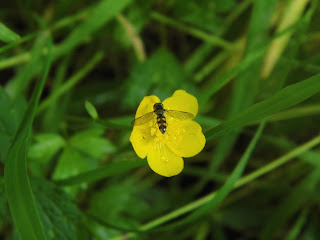 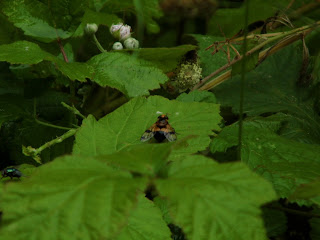 It wsn't just hoverflies that were visible on flowers in the sunny glades. Most of the longhorn beetles were the common Rutpela maculata (Yellow-and-black Longhorn), but I also saw two Stictoleptura rubra. The data for this species suggests that it hadn't been recorded at all in Northamptionshire! 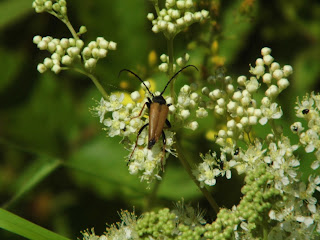 The final species of note was perhaps more understandably overlooked, a leaf mine in Figwort leaves caused by Amauromyza verbasci. This seems under-recorded nationally, and again not previously recorded from Northants. I have reported all of these sightings to the Northamptionshire Biological Records Centre to do my bit for cross-county recording! 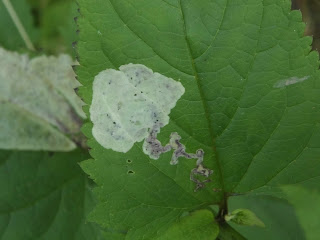