On Thursday evening Chris Durdin led a walk at Thorpe Marshes for CIEEM (Chartered Institute of Ecology & Environmental Management) members. I'm not a member, but the walk was organised by Jeremy Halls, and with a place spare he kindly invited me along. We were also accompanied by a member of the NWT's reserves team, who was able to tell us a bit about the habitat work that had taken place since the Norfolk Wildlife Trust took on the lease.

For ecologists visiting the site for the first time, the wetland flora and the Norfolk Hawkers were probably the main attraction. On the flood a brood of Tufted Ducks and two Mallard broods both showed themselves amongst the rushes, and a Gadwall called unseen. A Grasshopper Warbler reeled close by. Jeremy confirmed that the yellow plant at the back of the flood is Buttonweed, unlike the plant on the nearside which is Celery-leaved Buttercup. Buttonweed is an invasive species, also present at Hickling, but on the bright side it was a patch tick.

Of the other species we saw the pick were mostly invertebrates, including a small soldier beetle sp. Silis ruficollis, the Crab Spider Misumena vatia blending in with a Marsh Ragwort flower and a Mullein moth caterpillar. 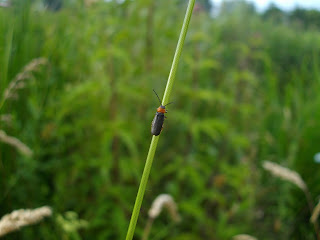 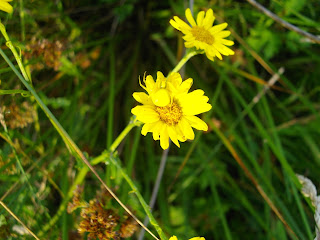 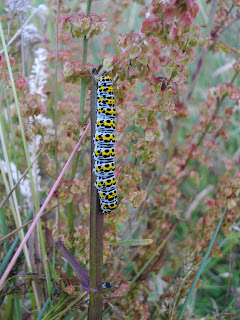 One other thing of interest was the brood of Mute Swans, which includes a white cygnet. This form, known as 'Polish Swan' is caused by a recessive mutation and is seldom seen - the only other one I have seen was in a brood of cygnets that nested near the road at Cley, probably 2009ish. 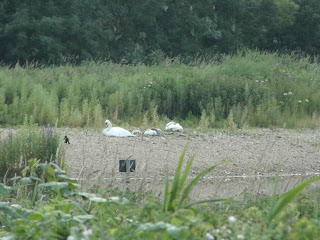