One of my main target species for this year was the Purple Emperor butterfly, a large and charismatic species that readers of Patrick Barkham or Matthew Oates will be well familiar with. This species was once present in Norfolk, indeed there is a record from Whitlingham in the 1800s, but the last population at Foxley Wood seemed to die out in the 1960s/70s. Since then there have been a few sightings, a couple of confirmed ones and quite a few unconfirmed, presumably relating to either migrants or releases. The species does appear to be colonising eastwards in recent times, and there are a few people that feel it may have been present but unseen for 40 years plus, so who knows whether it will be found in Norfolk at some point in the future.

Anyway, with little chance of seeing one in Norfolk, Cathy & I decided to book onto a trip to Northamptonshire with friend and wildlife tour guide Carl Chapman. We arrived at part of the Fermyn Woods complex at around ten, and were having a cup of tea when we were called to the entrance of the wood. A couple had just been for a walk without seeing any Purple Emperors, when they returned to their car one had landed on the ground just feet away!

After a few photos with wings open, the Purple Emperor flew powerfully around the car parking area, then landed again, this time wings closed. Despite drizzle beginning to fall, the butterfly remained for around ten minutes, before soaring up to the tree tops. We were close enough to see the lemon-yellow tongue licking the ground, and get an impression of the bold nature of this species. As we headed into the woods the rain begin to fall heavier, but the pressure was off, we had already seen our target species. 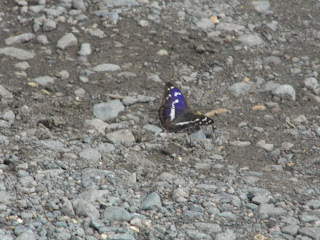 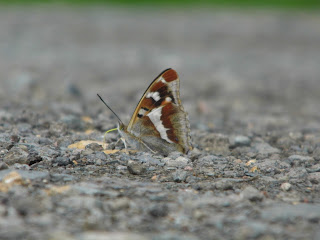 Heading further into the wood we stopped along a wide ride, where a small bit of sunshine had brought some butterflies out, including two Silver-washed Fritillaries. I shall post pictures of the extra species that we saw separately. Our next Purple Emperor sighting came as we walked along a path surrounded by farmland - it had apparently flown out of the woods up ahead. In the second wood we took the right-hand path, where we found another four Purple Emperors. The first one was flying around the tree tops, but the second one gave us our first views of one feeding on dog faeces, one of the major attractants of this species to the ground. 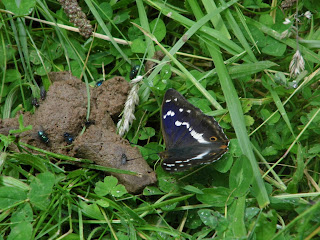 Further along another Purple Emperor was resting on the path, although as the sun came out it became skittish, only settling briefly in one place. We walked back to have our lunch, and were almost back at the car when a cyclist skidded to a halt. He had almost ridden over a Purple Emperor, and he picked it up off the path. When he carried on his way he passed ot to me, and it sat happily on my finger. 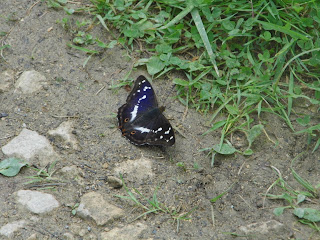 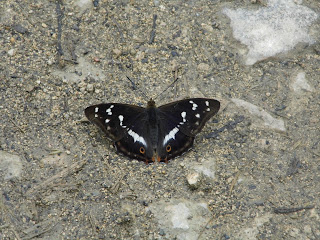 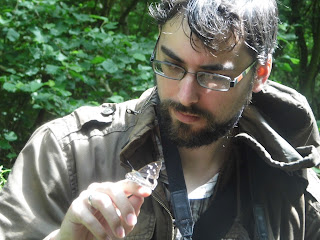 After lunch we headed back through the woods, but this time took the left-hand path. We continued to see Purple Emperors at intervals. One flying around a Sallow may have been our only sighting of a female, as all of the grounded individuals were males. Before turning back we saw two Purple Emperors together on the path, again allowing some excellent photo opportunities. One of them even landed on my boot, too close to photograph! On our way back Cathy pointed out a last Purple Emperor resting high up on a Blackthorn. Looking up at it I noticed a Hairstreak perched up nearby, which after a bit of faffing we managed to identify as a White-letter Hairstreak. 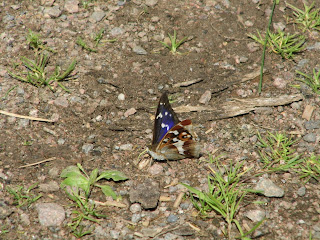 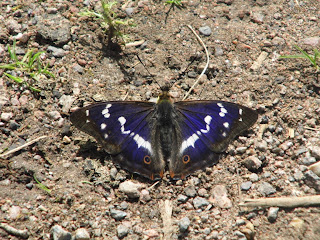 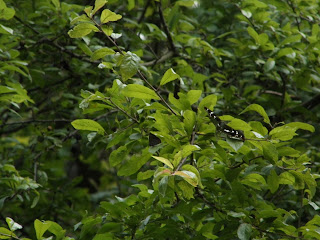 After an excellent day at Fermyn we headed back to Norfolk, arriving in time to watch the second half of the European championship final.
Posted by James Emerson