One of my target species this year is the Lappet Moth. Lappets are quite rare in Norfolk, and our hopes for seeing one were pinned on the open day at Holme NOA where one was caught last year. We arrived at the headquarters of the Norfolk Ornithologists Association to see a small group assembled ready to go through some traps. The first moths we were shown had been caught on the outside of one of the traps, and were a positive start - two of them were new for me, Kent Black Arches and Small Emerald.

The first trap we went through had been brought from Hunstanton, and contained mostly common species. The first Holme trap had a few nice species in, including several Ruby Tigers, but nothing new. There were two more traps to check, so we went to have a look. A Pine Hawkmoth and some Early Thorns were of note, and a Shore Wainscot was another new moth. Unfortunately there was no Lappets, but there we go. Back at the observatory we were shown a Barred Red that Trevor had caught, and some Large Thorns that had been bred from eggs.

Whilst with the traps a female Common Crossbill had been calling from a pine tree nearby, and back at the car park a Grasshopper Warbler reeled from close by. "It was showing well in that Hawthorn 30 seconds ago" was the message from other birders. 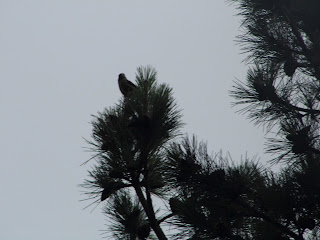 After lunch we called in at Holt Country Park to look for a plant I'd been told about, but there we failed to find it and after staring at leaf litter for a while we decided to give up. Near our car I had seen the hoverfly Seriocomyia silentis and there were two other sightings of note. Firstly my first Gatekeeper of the year was made more interesting by the presence of some extra black dots. Lepidopterists have long been fascinated by anything a bit out of the ordinary, and gave many of them names. This Gatekeeper appears to be an aberration named 'ab excessa.' The second interesting species was a slime mould, but a rather unusual looking one, probably from the genus Stemonitis, growing on some piling at the back of the car park. 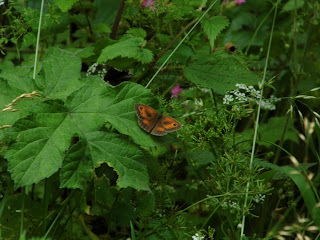 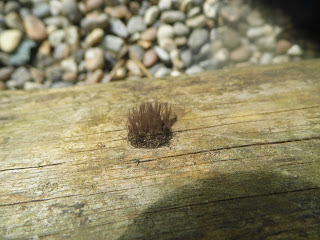