After Saturdays exertions I wasn't planning on going out on Sunday, and after lunch I found myself perusing Twitter. In particular I noticed that naturalist, author and all-round nice chap James Lowen had posted about a Red-belted Clearwing that he had attracted in his garden. For those not familiar with the clearwings they are an interesting family of day-flying moths with clear panels in their wings. They are occasionally seen nectaring at flowers, but usually are only seen if attracted by special lures that contain a pheromone. Red-belted Clearwings are scarce in Norfolk, and associated with old fruit trees, so not a particularly widespread habitat.

Shortly later, I received a message from James, saying that if I wanted to see the Red-belted Clearwing I could pop round to his later that evening. I gratefully agreed, and at the appointed hour I arrived to see several other moth enthusiasts were present. We were given tea and biscuits, and told that there was a bonus moth to see. Whilst sitting in the garden James had tried out a second lure, and had also attracted a Hornet Moth - the very species I had tried and failed to see last week! Many thanks to James and his family for their hospitality, and why not buy a copy of his latest book for good measure ;-) 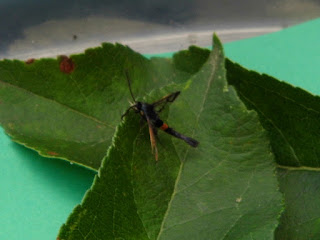 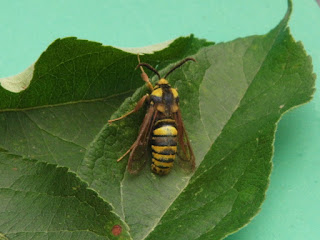 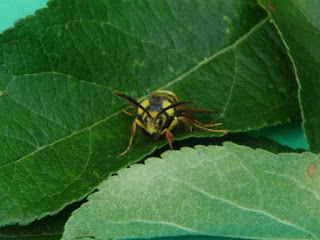