Barry's comment on my previous post reminded me that I now have photos of the four large (i.e. 2 inches plus) hairy caterpillars that are most often encountered by naturalists in Norfolk. So here is a brief guide to help you answer the question, "ooh, what's that big hairy caterpillar?" 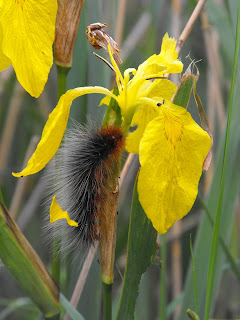 Caterpillar A is Garden Tiger Moth. These caterpillars are common and sometimes known as "Woolly bears". They are dark, with gingery hairs at the front and underneath. There are a row of white spots along the side, although these aren't obvious, and long whitish hairs on top. They are often found in late summer walking across paths, and occur in a range of habitats. 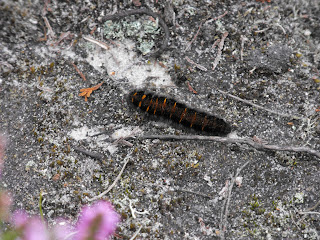 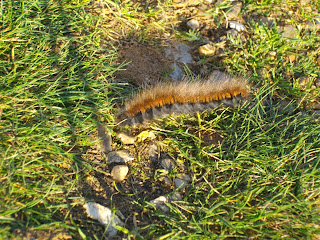 Caterpillar B is the Fox Moth. The top photo shows a young caterpillar, which is black with orange bands. However as the caterpillar gets older it turns into a caterpillar that could be viewed as an upside down Tiger Moth caterpillar, as the gingery hairs are on top and the dark hairs below. It does have long pale hairs, but not as long as the Tiger Moth. This species is also encountered walking across paths, but it much more restricted in its habitat, being mostly found on dunes or heaths. Winterton Dunes is a good place for these. 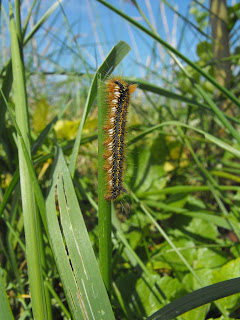 Caterpiller C is the Drinker moth. They are often found on tall grasses. The caterpillar is largely black, but with a horizontal line of white hairs above a line of gingery hairs. The back is patterned with gold speckles and black bobbles, with black tufts of hairs at each end. 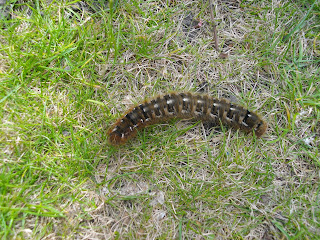 Finally caterpillar D, the Oak Eggar moth. The back of the caterpillar is dark, with squarish areas of pale brown hairs.There is a pale horizontal line along the side, with small orange circles regularly placed along it. The bottom half of the body and the facial area is gingery. This one was found in a garden, but it can be found in a range of habitats.

So there we go, happy caterpillar hunting!