TROWSE: A neglected bit of the patch

The majority of my patch visits up until the last couple of years were carried out on foot, and as it was no further to go I would often cut across Trowse Meadow rather than walk the first part of Whitlingham Lane. In recent years when I got lifts or latterly drove myself, I have headed straight to the main country park. This struck me earlier in the week, so I decided to head down to Trowse on Friday evening, specifically to cover Trowse Meadow and Woods, a rather neglected part of my patch.

I had a nice stroll around the meadow, without adding too much. I did notice a poplar tree that resembles Black Poplar, which would be new if it isn't a hybrid and is in a natural state. It also appears to have a yellow rust on it, although I think there are two possibilities, so that isn't straight forward either. I found an unfamiliar micro moth on Fleabane, which once home I identified as Dark Fleabane Neb (Apodia bifractella), a rare species in Norfolk and it looks like a new TG20 record.

After this I headed into Trowse Woods, and was only a few feet in when I noticed a 14-spot Ladybird. I had recently looked through my old ladybird records, so I knew that this was a new patch record, my 900th species here. Note that my numbering is based on the order I identify things, not necessarily when I see them. Whilst this may be counter-intuitive, the other option would be to re-do all of my numbering if I were to retrospectively identify something I saw earlier in the year, which does happen. In reality it is the overall number of species that interests me more than the order anyway.

The weather was rather overcast and humid, making the woodland seem rather opressive. I had a look in one of the large 'craters' just in case the Bearded Tooth fungus that used to grow here had returned. It hadn't, but there was a bit of fungi, including some bright Yellow Shield fungi (Pluteus chrysophaeus). This wasn't new, having seen it in a similar place last year with the Fungus Study Group. Whilst stood still, a shrew ran out from under a log. I didn't see it well enough to rule out Pygmy Shrew, although I suspect it was a Common Shrew. It darted out again, but knowing how active they have to be I left it to go about its shrewy business. 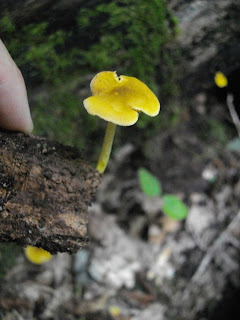 I emerged in the glade at the top of the woods to the strong scent of Buddleia. Disappointingly there were few butterflies or hoverflies around, a single Red Admiral soon flew off. I took the path along towards Whitlingham Hall, stopping to photograph some Robins' Pincuchion galls to add to my gall guide. As I reached the Lime tree avenue the smell of a barbeque reached me, coming from the packed Whitlingham camp site, which has been so successful there is currently a planning application to make it permenant and build three lodges into the woodland edge. A couple of Swallows near the Little Broad were the only birds of note. 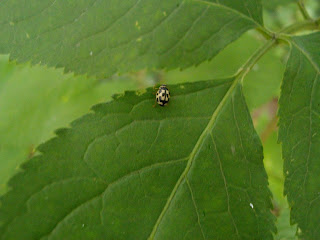 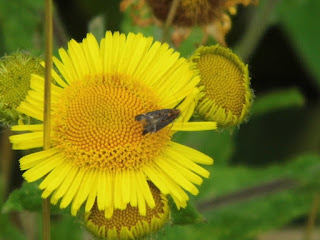 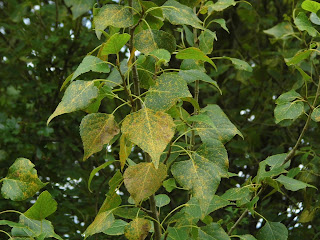 Possibly two more?! Firstly is this Black Poplar? The rust will probably require microscopy and some specialist literature.