On Monday Drew Lyness found an eclipse male Goosander at Thorpe Green (it turns out that it had been seen the previous day by locals but mis-identified as a juvenile Great-crested Grebe). The unusual timing of the sighting was also further added to by the fact that it was coming to bread. Photos of it in the water show one leg clearly, but not both. I'm not aware of anywhere in Norfolk that keeps captive Goosander (Pensthorpe have Red-breasted and Hooded Mergansers), and nor have there been many 'dodgy' records from other places, so I'm inclined to believe that this is a wild bird, but let me know if you are aware of a possible source for it. Unfortunately I was at work, but Kayn took some excellent photos that are on his blog here. Cathy kindly went and looked for it in the afternoon, but it had gone from the green, presumably onto the river nearby.

On Tuesday we got up early so that I could check Thorpe Green before work. Unfortunately it was too early, as the Mute Swans were the only birds that were present. With no news either way during the day I went for another look late afternoon, by which time there was lots of ducks but no Goosander. I then went and checked Thorpe Broad plus the bits of the river visible from it, with similarly negative results. As far as I'm aware it was last seen on Monday evening on the river, but it could well still be in the area, or maybe even on the Wensum in the city, so keep an eye out!

Also on Monday Chris Durdin had led one of his guided walks around Thorpe Marsh. Whilst there the participants had looked at the Common Skullcap plants, but instead of finding the leaf beetle they found a larva of the Skullcap sawfly. I spent some time inspecting the leaves, but failed to find any larvae, but as luck would have it I did find another two beetles!

I didn't add anything new to my patch list on this visit, but have added three, possibly four species by virtue of an omission and identifying some species I had previously not found names for.

896. Small Nettle - Missed off my plant list but definitely seen.
897. Arge melanochra - a scarce/overlooked Sawfly seen at Thorpe in June and confirmed recently by Tony Irwin 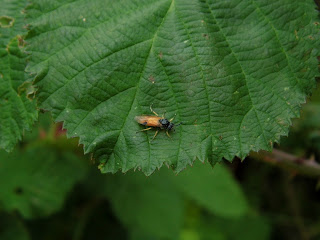 898. Black Robber Fly - Seen in June but not counted whilst eliminating any possible confusion species. 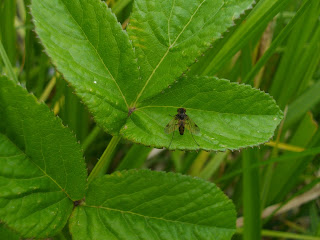 And quite possibly 899. I think this is the cranefly Ptychoptera contaminata, but I still need to see if I can rule out any similar species. 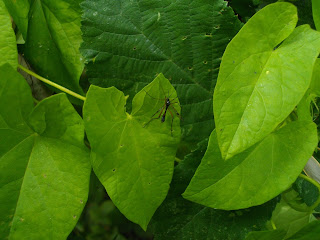