Earlier whilst at Whitlingham I didn't have my binoculars with me, so other than a cursory glance on the Great Broad I didn't really look too hard for birds. Luckily Justin went for a proper look later in the evening, and I got a phone call to say that he had found a female Mandarin at the far end of the Little Broad. Cathy & I went back to have a look, and saw it swimming along the edge of the broad, actively catching flies. 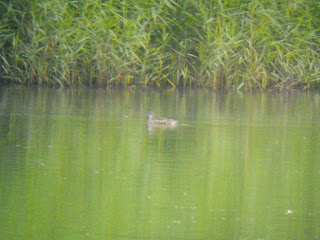 
Further round Justin had also located the Goosander on the river, which despite being in the area a while now I had yet to catch up with. Having dropped Cathy back home I returned for a third time and set off for the far corner of the country park. On the river near the boat club the Goosander was still present, along with a pair of Great-crested Grebes and a small group of Mallards. Further round in the conservation area bay the only bird of note was the female Wigeon that I first saw last month. 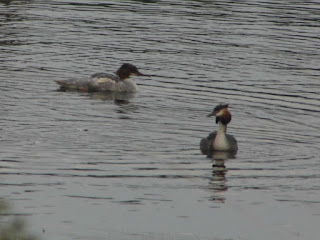 Also of note were a flock of House Martins and a few Swallows over the car park.
Posted by James Emerson