One of the positives of being part of wildlife blogging and online communities (and also the reason I finally caved in and joined Twitter) is being able to see what other naturalists are recording in their parts of Norfolk and learning about species I've never seen (or sometimes even heard of). From a recording point of view I like to find out how to identify a species, then go out and look for it myself. By then submitting my records to the relevant county recorder or recording scheme this is a win-win situation.

Recently I heard about a search for a rare beetle. The beetle Baranowskiella ehnstromi, which doesn't have an English name, is Europe's smallest beetle, and has only recently been found in several European countries. Not only does it require a microscope to find it, the beetle also lives inside a scarce bracket fungus, Phellinus conchatus, all explaining why this species could go overlooked. Earlier in the month Andrew Duff, a coleopterist* living in Norfolk, decided to search for the beetle, which had never been recorded before in Britain. This is where I first heard about the search, as Andrew needed the help of local mycologists** to locate the bracket fungus that hosts this tiny beetle.

The collective hard work paid off, and Andrew, along with mycologists Tony Leech (the Norfolk fungus recorder) and Neil Mahler (the Suffolk fungus recorder) managed to find Baranowskiella ehnstromi at a site west of Norwich. This is now being written up to support the addition of this species to the British list. I was pleased for them, but at the back of my mind was the thought that I knew of a tree that had the same bracket fungus on in the Whitlingham area. Could that too hold this beetle?

Because Baranowskiella ehnstromi is so small it is almost impossible to detect in the field, so I took a small piece of the bracket fungus home and looked at it under a microscope. After a while I noticed the rear of a beetle sticking out of one of the pores. This odd behaviour is typical of Baranowskiella ehnstromi, which seems to rest by plunging head-down into the pores of the fungus, without going completely in. Eventually the beetle emerged and I got a photograph. Andrew has confirmed that it is the correct species, and kindly allowed me to blog about it before his paper officially documenting the discovery is published. Other than the west Norwich site, Neil had also found the beetle at a site in Suffolk, but my sighting may well be only the 3rd British record, which is amazing. With this in mind I have been asked not to say exactly whereabouts I found it, to protect both the beetle and the fungus from being over-collected.

There isn't much information about Baranowskiella ehnstromi yet, but here is a short article describing it being found in Denmark in 2012 - http://sciencenordic.com/europe%E2%80%99s-smallest-beetle-found-denmark 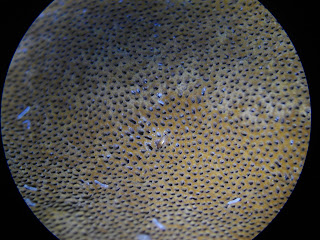 Patch species 943. Baranowskiella ehnstromi. If you look carefully, the beetle is just below the middle of the picture, viewed at 20x