Despite being recorded annually in Norfolk, Bee-eaters can be quite difficult birds to see. Typically they are seen (or sometimes just heard) flying over, never to be seen again. I had only seen one in Norfolk, a bird at Glandford that stayed in the area a few days. All this meant that a Bee-eater in the Winterton area that had remained for the best part of a week was a major draw for East Anglian birdwatchers. Having had a busy weekend I hadn't thought about going to see it, but on Sunday evening Ricky texted me to say that he was going to go, did I want a lift? Despite thinking that it would probably have headed off to roost before we got there I accepted the offer, and the gamble paid off nicely as we got excellent views of the Bee-eater, firstly perched up, then gliding about and finally feeding. A great end to the weekend, and thank to Ricky for the lift. 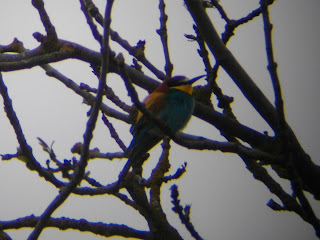 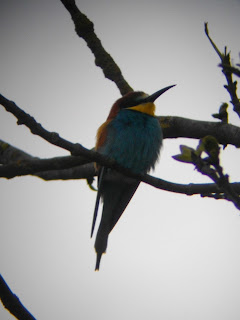 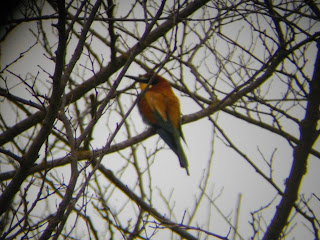 Email ThisBlogThis!Share to TwitterShare to FacebookShare to Pinterest
Labels: Bee-eater