Hot sunny days are great for lazing about, but less great for lugging a telescope around a busy country park on the outskirts of the largest urban conurbation for about 100 miles. The place was packed, so I attempted to be as quick as possible whilst carrying out this months wildfowl count. On the Little Broad a couple of Common Terns were resting on the line of buoys and straw close to the south shore, allowing me to take a few photos. Lone Gadwall and Tufted Duck, three Mallard and a couple of Mute Swans completed the Little Broad count. 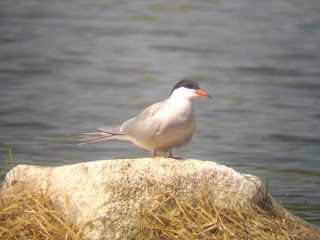 The only bird present in any numbers on the Great Broad was Lesser Black-backed Gull, with 87 counted, mostly in a flock east of the island. The drake Pintail x Mallard hybrid that now spends most of its time at Thorpe Green was also present near the island. There is a lot of Greylag Geese goslings about, with a creche of 47 goslings probably representing a minimum of six broods. In contrast I only saw one brood of Egyptian Geese and Canada Geese. Only 7 Tufted Ducks were left, although the broad was quite disturbed. Across the river at Thorpe there were lots of gulls and four Common Sandpipers. Frustratingly a group of people were trespassing on the hingle edge fenced off for Little Ringed Plovers. Why do people feel the need to do this when there is an accessible area for them nearby?

It was my most productive day of the year for butterflies, including two Brimstones and a Holly Blue, neither of which are particularly widespread at Whitlingham. Small Tortoiseshell, Orange Tip and Peacock were also present. The hoverfly Leucozona lucorum was nice to see again, but the most pleasing site was a fly, Bibio anglicum, not because it is particularly unusual, but because it becomes the 1000th different species that I've seen on my local patch. A significant personal milestone, and one which I'll probably write more about as some sort of article. 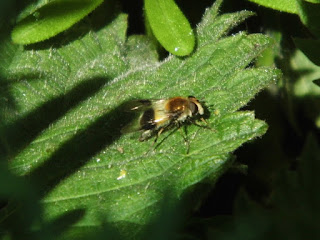 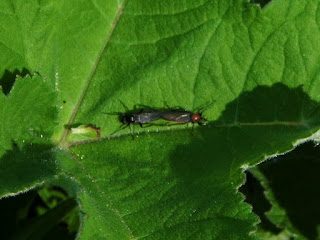