This weekend was the Norfolk Bird & Wildlife Fair, and having enjoyed our visit last year Cathy, Margaret & I decided to call in. Having had a look at the lecture list we settled on Sunday so that we could listen to Julie Curl's talk about wildlife in archaeology. We all found the talk very interesting, vindicating our choice. In particular Julie touched on the discrepancies between documentary evidence of birds being eaten at banquets compared to the archaeological evidence. It appears that when estates were writing that they were serving up hundreds of Bitterns they may well have just had one or two as table decoration and been feeding their guests commoner birds like geese, all disguised with strong herb sauces. Something worth bearing in mind when looking at old bird records!

After the lecture we went for a walk around the grounds. Our first port of call was the rose garden, where two Spotted Flycatchers had been seen the previous day. There was no sign of them whilst we were there, although a bonus was a Hobby flying past. We then took the path across the meadows, stopping at a small pond. Here we saw Azure and Large Red Damselflies, Four-spotted Chasers and Cathy spotted a small fish that looked like a Minnow. 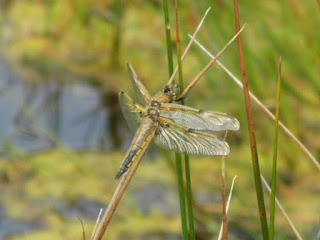 Whilst we were near the pond Cathy asked what the noise was that we could hear in the background. Dismissing my original suggestion (a Crow that had swallowed a duck) we carried on along the boardwalk until we reached a small hide overlooking a large pond. Once we entered the hide it became apparent that the noise was coming from a target species of mine, the Edible Frog. The loud calls meant I scanned the area closest to the hide, but Cathy pointed out the fifty or so Edible Frogs much further back amongst some weed. They were mostly lime green, with white vocal sacs visible when they called. Apparently these frogs originate from a release at nearby Erpingham in 1977. Having seen the frogs we returned to the main part of the fair for lunch, before having a look around the main Marquee. 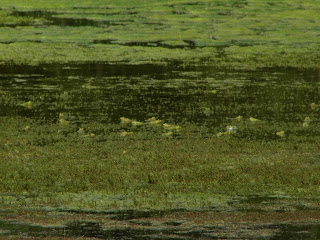