NORFOLK: The birds and the bees. And fungi.

A week of easterly winds and a generally promising weather chart for rare birds had whipped up something of a frenzy amongst birders, to the point where anything less than a full-scale Sandgrouse invasion risked being a disappointment. To be fair, Shetland has now had a nice array of very rare birds, including Britain's first Siberian Accentor. Norfolk so far has had the sort of birds you would expect, just in higher numbers.

With this background, I had Sunday to go out and had to decide how to spend my time. In the end I decided to head to the north Norfolk coast. I started at Cromer, where after a short walk I ended up near the lighthouse and a small crowd waiting for a Dusky Warbler. It could be heard calling from some Sycamores along the clifftop, but was typically staying out of view. Eventually I got a few flight views, before a better look as it moved through some bracken, and then finally in one of the Sycamores. This was a new Norfolk species for me, having previously only seen one in Yorkshire.

Driving west along the coast road I considered stopping at Muckleburgh Hill, but the sun had come out and I wanted to look for some bees at Walsey Hills. Ivy Bees have colonised several places along the coast, but at Walsey there are some other Colletes bees, probably Heather Bee (Colletes succinctus) alongside the Ivy Bees. Handily David the warden was about, so he showed me the nest holes near the NOA observatory and then some good areas of Ivy to check.

When the sun came out the ivy was covered in insects, including Red Admirals, Painted Lady, Wasps, Honey Bees and at least seven species of hoverfly. I did eventually find one Colletes bee, probably a pale Ivy Bee, collecting Ivy pollen. I also kept an eye out for fungi, seeing some small brownish oysterlings that I recognised as Resupinatus trichotis. Back up at the observatory more bees were visible. including a nice buff-banded Ivy Bee and some slightly slimmer, paler looking ones that looked like Heather Bees. There is another member of this family, Sea Aster bee, that looks similar to the other two, hence my slight reticence to commit to definite IDs. It began to rain, so I had a quick look at a Jack Snipe on Snipe's Marsh through David's 'scope before heading off. 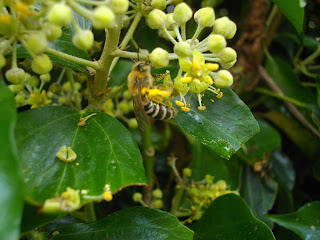 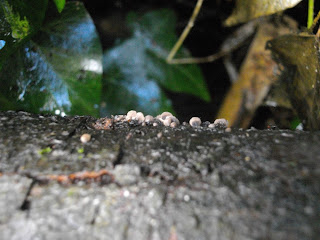 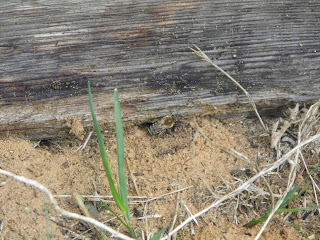 Next stop was Stiffkey, where I started off in the woods. There had clearly been an arrival of Goldcrests, with 50+ in scattered amongst the trees. I love Goldcrests, but it wasn't too long before I was getting a crick in the neck, checking and then rechecking each one as they flitted about. A few Chiffchaffs provided some variety. I left the woods and walked along the edge of the Sueada. With not much going on there I then headed west along the coast path towards Warham. At this point I had a decision to make, whether to go for a long walk or move on. In the end a text from Gary telling me he had seen a Ring Ouzel made my mind up for me - I headed back to Norwich to spend a bit of time at Whitlingham instead.

I wasn't particularly optimistic about seeing the Ring Ouzel - when Gary had seen it it had appeared to land somewhere near the picnic meadow. Before heading there I decided to check the areas of short cropped turf around the campsite, and by pure luck heard the Ring Ouzel call and fly across the campsite into the lime tree avenue. I scanned the trees as best I could, then checked the field the other side and the meadow at the top of the avenue, but didn't see it again. Three Green Woodpeckers together was a bonus, and good to see that they bred successfully. On my way back I noticed an orangey fungus growing on a log. A closer look showed that it was Wrinkled Peach, although not very wrinkled, so a good visit, and the right call to come back. 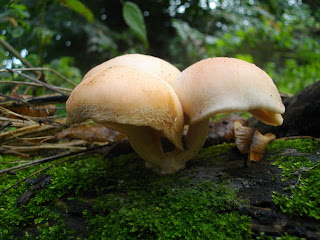