On Sunday morning Strumpshaw Fen hosted a fungus walk led by Rodger, one of the volunteers. I'd been asked if I could come along to help with the identification, and as I had some time free I agreed. The walk wasn't due to start until 10:30, but I arrived early and met Ben to see if any moths had been caught overnight. The season and near-full moon meant not many moths were caught, but Black Rustic and Autumnal Moth were new for me, whilst Merveille de Jour and male Vapourer moth were both good to see. 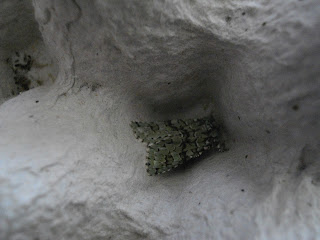 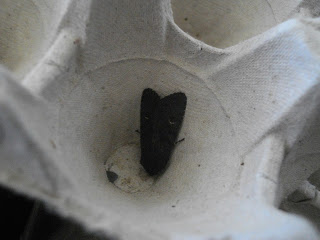 
After sheltering from a heavy rain shower I headed into the woods to have a quick look round. I was joined by Flo, one of the residential volunteer wardens, who showed me a few of the fungi he had seen on the reserve recently. There were two interesting but tiny bonnets near the log circle, Orange Bonnet and Dewdrop Bonnet. 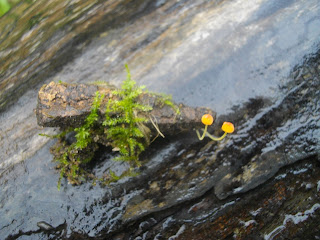 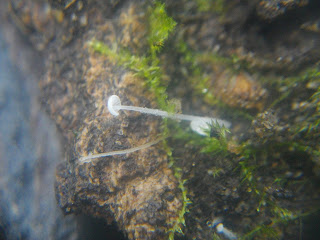 Dewdrop Bonnet viewed at 10x (notice the droplets along the stem)

Back at reception we met the visitors who were coming on the walk. We started at the bird feeders, where there was a lot of Glistening Ink Caps around the base of a tree stump, before pointing out Common Jelly Spot on some cut wood. Just around the corner were some Blue Roundheads growing in a grassy clearing. Further along we saw some of the most impressive of Strumpshaw's current fungus crop, Shaggy Ink Caps. There were fruiting bodies at different stages of development, from young ones now emerging to older ones that were almost fully deliquesced*. Alongside the Shaggy Ink Caps were clumps of Common Ink Cap. 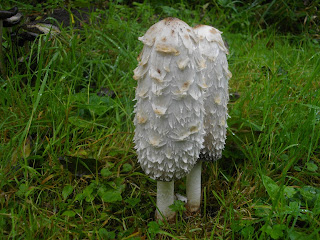 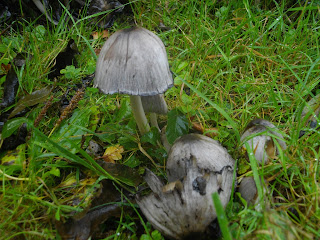 After a quick diversion towards the fen hide to see some Conical Brittlestems we took the woodland path. Here we saw some Tawny Funnels, followed by Common Earthballs and Amethyst Deceivers. Further along we saw some Candlesnuff and members of several other families, including Purple Brittlegill, White Fibrecap and Oakbug Milkcap. There was a big swarm of Small Stagshorn, lots more earthballs and some Common Puffballs. 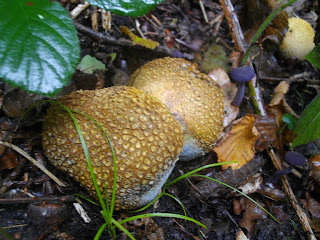 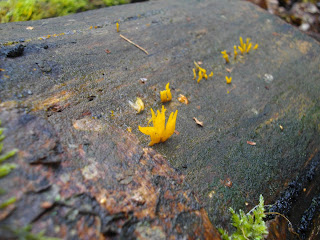 Now well past the finishing time of the walk we headed back, pointing out Turkeytail and Rosy Bonnets on the way, finishing with the Dewdrop Bonnet that I had found before the walk. Luckily the wet weather during the week had given us lots to look at, and there is lots to see if you are at Strumpshaw in the next few weeks.

* Deliquescing is the process where the ink caps dissolve into ink, starting at the bottom edge of the cap and then moving up, eventually leaving just the top of a cap.
Posted by James Emerson