After leaving Marham I dodged the football traffic and headed to Whitlingham to carry out the October WeBS count. There was more birds on the Little Broad than in recent visits, with Gadwall in their favoured areas of weed at the west end and five Moorhens, probably a family group. On the slipway I noticed one of the Black-headed Gulls had a white ring on its right leg. A closer look showed that it was J5JE, a Norwegian bird now returning for its fourth winter here - it spends the summers near Oslo. So looking through those, Mute Swan, Tufted Duck and Cormorant numbers are all similar to last year. Since the summer there has been a definite lack of Greylags around, this is the second count this year with none on the Great Broad, the 15 were two on Thorpe Broad and 13 on the river (no counted within WeBS but part of my 'Whitlingham area' count as part of the same catchment). Wintering duck numbers are still relatively low (Mallard, Gadwall, Pochard, Teal), but Coot and Black-headed Gull numbers are significantly up, perhaps in part due to the recent easterly winds.

Having been looking at leaf mines earlier in the day I was still looking out for them, seeing a couple of new ones, the 'snail trail' mines of Kent Bent-wing (Phyllocnistis xenia) in poplar, and a creased mine of Phyllonorycter stettinensis on Alder. 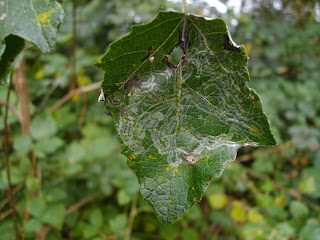 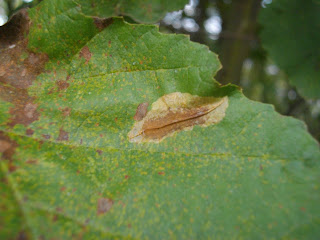 There was a bit of fungi about too, including these Ink Caps. They are probably Haresfoot Inkcap, although there are one or two other similar species. 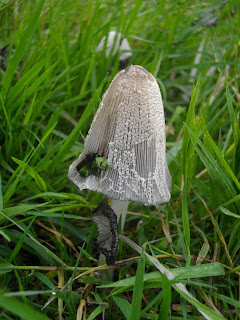 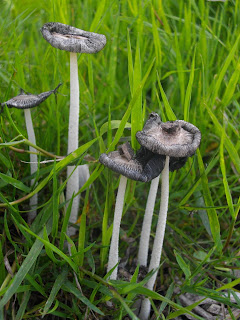