NORTH NORFOLK: Wheatears and a whale

Whilst I'm a big fan of fungi, birds remain my favourite 'group', so I had been acutely aware over Saturday and Sunday morning that whilst I was involved with fungus-related events Norfolk's first twitchable Isabelline Wheatear was present at Burnham Overy Dunes. On Sunday that area of the dunes also held a Pallas's Warbler and a Desert Wheatear, so a good cluster of rare species. After lunch I headed to Burnham Overy, and having checked the tide times parked up in the village car park.

After a brisk walk out to the dunes I arrived at a large group of birders, only to find that they were gathered to watch the Pallas's Warbler rather than the Isabelline Wheatear. As it happened this worked out just fine, as the Isabelline Wheatear came to us, flying in onto the ridge of a dune in front of us, and showing well for a brief period. It moved out of sight and then was accidentally flushed, at least providing flight views. Once it had gone I had a look at the Pallas's Warbler, which was very mobile amongst some Privet and scrub. 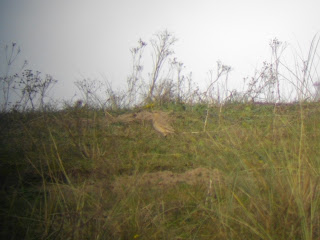 I decided to head west, keeping an eye out for the Isabelline Wheatear, which appeared to have gone down into the dunes not too far away. A birder further along beckoned, and upon reaching him we saw that he had located the Desert Wheatear. Earlier on I had a brief chat with Carl Chapman (Norfolk's cetacean recorder), who had told me that the Fin Whale that washed up on the beach recently was still present, so I decided to retrace my steps to the boardwalk, keeping an eye out as I went, before heading over to see the whale. Some people find looking at dead whales ghoulish, but I see little difference between this and looking at museum specimens. The carcass was roped off and people were being respectful - hopefully those seeing the dead whale will be more receptive to environmental issues around our oceans in the future, which would be a fitting epitaph. 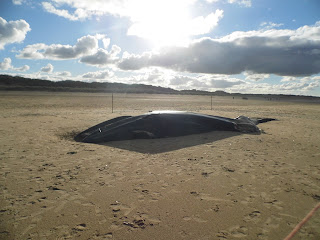 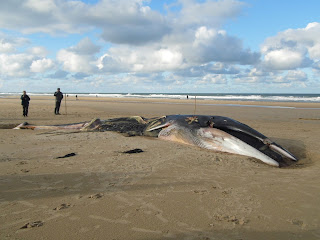 I crossed the beach and went up into the dunes to have a look around, but saw very few birds. There was quite a bit of fungi, including lots of puffballs, some Dune Dapperlings and Dune Waxcaps. One of the dune specialties here is Winter Stalkball, and I was able to show how similar the smaller ones are to rabbit droppings! With the light beginning to fade I walked back to the car after a highly productive afternoon. 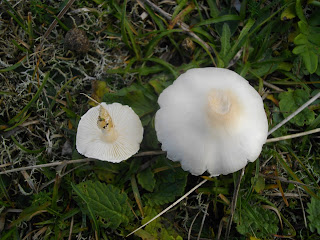 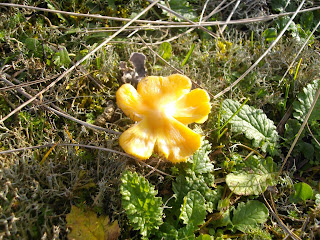 Dune Waxcap, an old specimen split so it looks like a flower 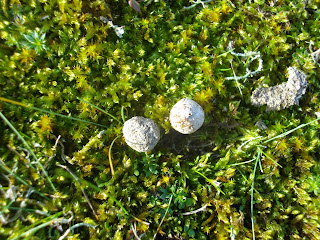 One is a rabbit dropping, one is a Winter Stalkball! 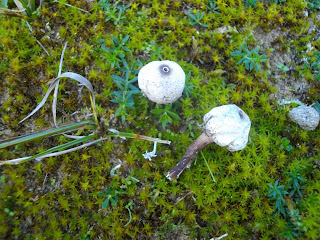 Older Stalkballs are easier to identify, although still need some work to find. Luckily they often grow in quite big groups.
Posted by James Emerson