On Sunday morning I headed to the Plantation Gardens, to help with the fourth and final wildlife workshop, being held to help volunteers and regular visitors to record the wildlife of the garden. The focus of this workshop was fungi, so we had a walk around to find as many species as possible before bringing them back to a display table to discuss them. Because much of the garden has chemicals used on it there were no grassland species, so most of the fungi we did find was in the woody areas around the edges.

Most of the species were relatively common ones, such as Dead Man's Fingers, Hairy Curtain Crust and Sulphur Tuft. The most interesting species was a Lepiota sp, possibly Chestnut Dapperling. After discussing features to look for, recommended books and how to record species, the workshop ended and I headed home for a bit of lunch. 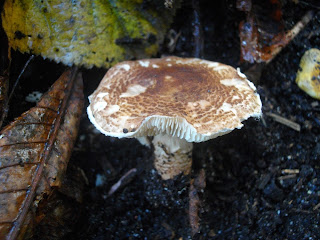