Having failed in after work trips to see a Yellow-browed Warbler reported on St Benedict's Street earlier in the week, or Bearded Tits at Whitlingham last week and Thorpe yesterday, I was in two minds about trying to see a Great Grey Shrike found at UEA late this afternoon. Given the scarcity of this species around Norwich, I decided to give it a go anyway.

The area around the hospital was busy, so I parked further along and walked back through part of UEA woods. When I first got to Lusty Hills there were students quadratting, so I knew the bird wasn't going to be in that area. Initially I only saw one birder, who didn't look particularly happy and didn't say anything, suggesting that the shrike may have either gone or been out of sight. Near the compound I heard Dunnocks and Blackbirds alarm calling - surely the shrike must be in that hedge? I couldn't see it, so I kept going further round and thankfully saw a small group of friendly faces. At the head of the group was Ricky, who had his telescope trained on the Great Grey Shrike. 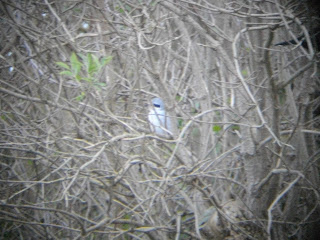 We watched it for a while, and assumed that it was going to roost as it wasn't very active. More birders arrived, and as we watched the shrike it seemed to perk up, before diving further into the bushes and flying out back onto Lusty Hills. At this point I headed home, but the bird continued to show and apparently went to roost nearby, so hopefully it will still be there tomorrow for those who couldn't get there tonight.
Posted by James Emerson