On Saturday Cathy & I went for a walk in the Brecks, and it was immediately apparent from looking into the vegetation along the sides of the path that there were many more invertebrates here than we had seen of late (due in equal parts to the location and time of year I suppose). In particular a nettle full of Red-and-black Froghoppers found by Cathy was particularly spectacular. 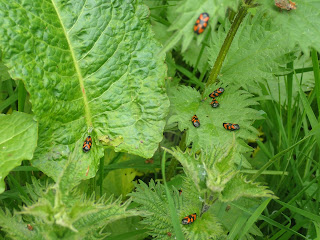 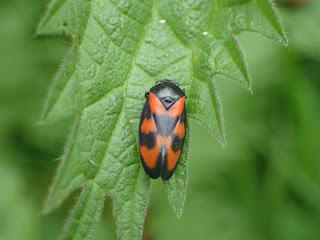 Other highlights included several tortrix moths, which I think are Common Roller, Ancylis badiana. Despite the name, this species is scarce in Norfolk (partly gauged by the lack of records on the authoritative Norfolk Moths website, and partly because Dave Appleton who has seen 1000+ moths hasn't seen it!). The hoverfly Leucozona lucorum was also out, a Red-breasted Carrion Beetle was found on a grass stem and a scarce (notable B) longhorn beetle Phytoecia cylindrica was also seen. The latter looks a bit odd because it has no neck - the head is the same width as the pronotum. 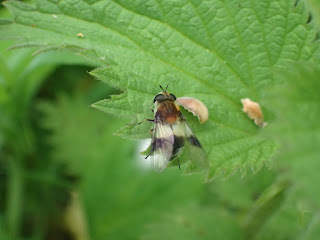 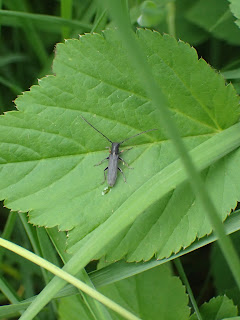 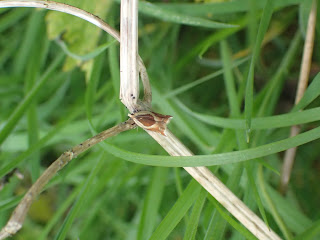 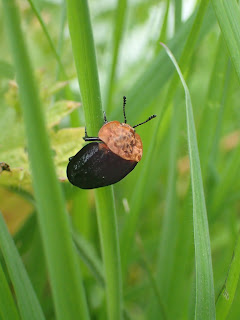 I have taken a bit of an interest in sawflies recently, and saw two of them on this trip. The Turnip Sawfly (Athalia rosae) is a distinctive species and was easy to identify. A second, all black species however isn't easy to identify. I got it down to the genus Dolerus, however there is no field guides, and only old keys to sawflies. To give you an illustration of how frustrating I find some of these keys, I will reproduce part of the first couplet below. Remember, I am trying to decided which branch of the key to take for my sawfly, which has a black abdomen and black thorax. The options are:

Now, to be fair there is much more to each option after that, but in relation to colour we have the choice of always black with a thorax that may have red marks (so by definition may not), or more or less red marked, or entirely black with a black thorax. I don't find that particularly helpful. So, if you are a sawfly expert, then please write a nice, user-friendly field guide for me. Thanks.