Cathy & I were on the way home from work when we received a call from Justin to say that him & Steve had found a White-tailed Eagle at Buckenham! With no optics on me I had to choose between saving time and heading straight there, or calling in at home for binoculars and 'scope and risking it flying off in the meantime. Justin had said that the eagle looked settled, but I had been told the same thing about a Black Tern at Whitlingham the previous day, which flew off 5 minutes later!

I decided to go home, and after a swift turnaround Cathy & I were heading towards the mid-Yare. Parking up at the station we crossed the railway line and I scanned the marsh on the off-chance that the White-tailed Eagle would be visible. To my surprise it was! The advantage of looking for a very large bird in a fairly flat landscape. After taking a good look we carried on along the track, until Gary & Alysia drove up. After showing them the bird in the scope, they gave us a lift down to the fishermen's car park where we joined a small crowd watching the eagle. 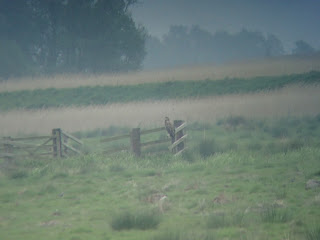 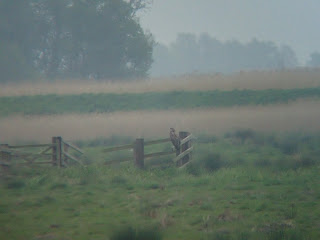 We stayed for around an hour, during most of which it sat serenely on a gatepost whilst hares wandered non-plussed around it. The eagle was less inclined to tolerate a Chinese Water Deer however, which wandered up to the gate. The eagle raised its wings, and whilst the deer appeared to bare its tusks (as much as it could), it soon thought better of it and ran! At about 19:40 it flew off slowly towards Buckenham Carrs, scattering the Greylags off the marsh. An excellent evening, and thanks again to Justin.
Posted by James Emerson