There had been a number of migrants seen passing through Whitlingham and Thorpe over the bank holiday weekend, so I was keen to check out both on the Monday before returning to work. I arrived at Thorpe Marsh and immediately noted some small hoverflies on a nearby buttercup. They had a slim waist, and I suspected that they were a species of Neoascia, a genus that I had not recorded before. A selection of photographs from different angles were enough to confirm later that they were Neoascia meticulosa. 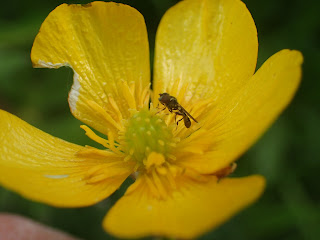 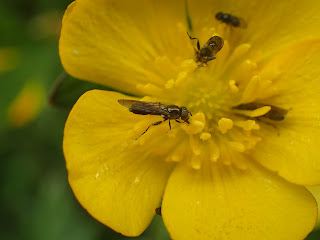 I took the riverbank path first, an immediately noticed that Sedge Warblers were particularly in evidence (I heard at least 14 around the site on my visit, but that is an undercount). Turning the corner towards the viewpoint I heard my first Garden Warbler singing from some bramble scrub, although it was very skulking. Tow Common Sandpipers were making their way along the western edge of the broad, and a brood of Greylag goslings were also present. The Great-crested Grebe was still on its nest - two young were seen the following day. 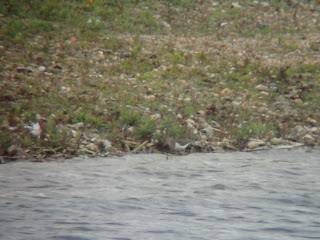 After a quick chat with Mike, who was sat on one of the viewpoint benches, I carried on along the edge of the woods towards Bungalow Lane. Here I heard and saw my first Reed Warbler of the year. Walking down Bungalow Lane I stopped to admire a female Orange-tip nectaring on Garlic Mustard (one of its foodplants, although it tends to mostly use Cuckoo Flower here as the commoner species). A short burst of Grasshopper Warbler reeling came from Griffin Fen to the east, and shortly afterwards I heard more prolonged reeling from a bird on Thorpe Marsh itself.

My final interesting sighting of the visit was an Andrena haemorrhoa bee sheltering at the edge of the path. Incidentally there was a poster up advertising pond-dipping, which will take place on the final Sunday of each month over the summer if anyone is interested. I think it was 10-12, but best check if you are travelling any distance. 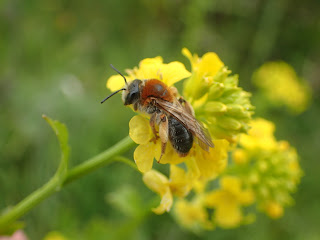 I then headed round to Whitlingham, which was very busy, due in part to a swimming race at the western end. Heading down to the island there were lots of terns flying back and forth. I saw a total of eight Arctic Terns, with a least one Common Tern in the area too. I love watching terns swooping over the water, so spent a while watching them before heading home for lunch.
Posted by James Emerson