On Saturday I took the opportunity to visit Swangey Fen with the Norfolk Fungus Study Group. This reserve is owned by the Norfolk Wildlife Trust but is normally closed to the public, so we met nearby and transferred into fewer cars before heading down a bumpy track to the small parking area.

Heading into a wooded area we soon arrived at a sunny glade, where I noticed one of the reddish Nomada bees. I managed to get a few photos of it, but it turned out to be one of a group of similar species that require a good look at the tips of the mandibles to identify - needless to say I didn't get that close! Anne spotted some hoverflies feeding on a sap run on a nearby tree that turned out to be Ferdinandea cuprea, a species that I thought I had seen in the past but can't find any trace of in my records, so presumably new. 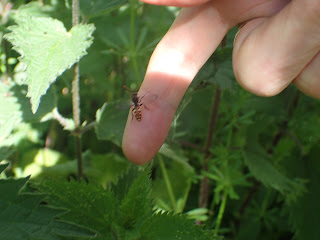 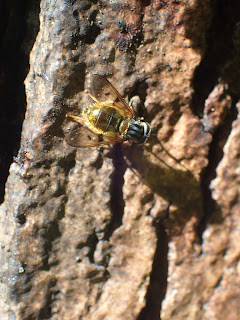 I hadn't missed much fungi whilst looking at the invertebrates, and indeed found a Scutellinia sp whilst wading across some mud. We were a bit surprised to find several toadstool types a bit further up, as they tend to be rather scarce in late spring and summer. Mycena acicula, Rickenella schwartzii, a Lactarius sp and a Naucoria sp were all seen along the path. Yvonne called me over to show me a moth she had found, which turned out to be a Grey Birch, another new species. Neil found a crust on Alder, Vuilleminia alni, which looks like it is new to Norfolk, if rather underwhelming to look at. The path at this point was getting very boggy, so we turned round and took a different path. 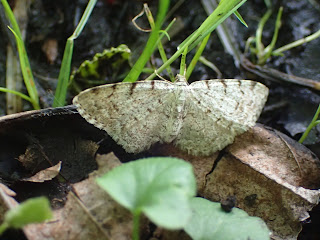 We stopped for lunch in a sunny spot, seeing lots of Azure and Large Red Damselflies. Close by some Ink Caps were growing on a pile of cut reed, and when I checked the next one along I saw a Glow-worm larva, which was a nice find. A Cuckoo called in the distance, and a dragonfly exuvia was on some emergent vegetation. Most of our finds in this section were rusts or resupinates, but the rust on Great Fen Sedge was of note because it is one of Kew's 'Lost and Found' fungi to look out for. 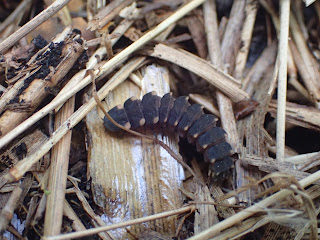 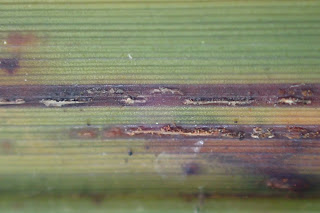 The last interesting species before we headed back was the Reed Mat Disco, Trichobelonium kneifii, a small yellow cup fungus that grows on damp reed. Four Red-breasted Carrion Beetles were seen, and whilst watching them we also saw a brood of young Pheasants. 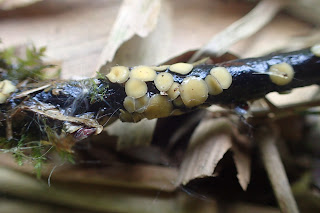 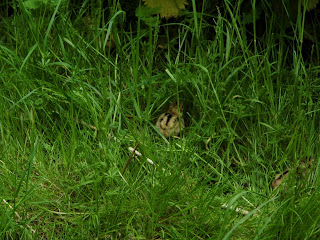 Swangey Fen was a very intersesting place to visit, so thanks to the NWT for allowing us in to do our recording, and to Steve for sorting out the arrangements.