WHITLINGHAM: May WeBS count and flies

After Saturday's bird race a lay in was in order, but I knew that at some point I had to go to Whitlingham to get the May WeBS count done. In the end I headed down in the evening, which was well timed as despite the warm weather it was relatively quiet as I made my way around.

The Little Broad was quiet, but the Mute Swan pair had four young cygnets, my first of the year here. There were only three broods of Greylags visible on the Great Broad, including one fairly recently hatched one, but perhaps the others were out of sight on the island. I got my first view of the new Swift tower in the barn car park. It's unlikely that it will attract any Swifts in its first year, but please let me know if you see any using it. 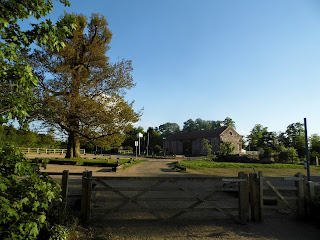 Further along the broad I saw a large duck flying over, and a quick check revealed it was a Shelduck, my second record of this species here this year. There was little else of note as I made my way to look across to Thorpe with the exception of some Swifts flying high over the broad. Duck numbers had decreased sharply from my last count, a single Gadwall and two Tufted Duck were the only additions to the resident Mallard. Finishing my count from the conservation area I spotted a Green Sandpiper, which flew onto the edge of the main island.

As I was leaving I had a quick look at some sunny Horse Chestnut leaves. I have been keeping an eye out for Brachyopa hoverflies, which are unusual in that they look more like other fly families than typical hoverflies and are associated with sap runs in trees. I saw a fly that superficially had the right features, an orange abdomen and a grey thorax, but a closer look showed that it wasn't a Brachyopa. A second fly nearby looked distinctive, but I've not identified it yet either. 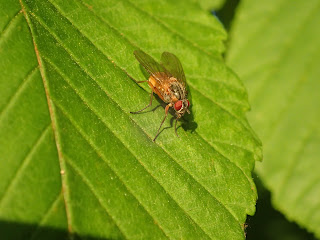 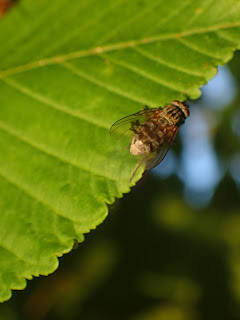