On Wednesday evening I attended a 'using your ears' bat workshop at Whitlingham. This session, organised by Norwich Bat Group and delivered by Lisa Worledge of the Bat Conservation Trust was aimed at helping people using heterodyne bat detectors to identify bat calls, not just based on the call frequency, but also on things like rhythm and repetition. This proved to be a very useful session, using a mixture of bat calls recorded from magenta detectors, along with simulated calls made up of clicks and artificial notes. Afterwards we did go for a quick walk, but it was raining steadily so we gave up after a short while. I have been on quite a few bat walks before, but I found the session very useful, particularly as one of the species we looked at was Serotine, which I am yet to see.

Before the session started I had a quick look over the broad and in the vegetation nearby, seeing a Common Blue Damselfly and several mating pairs of Woundwort Shieldbugs. 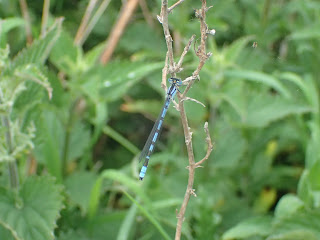 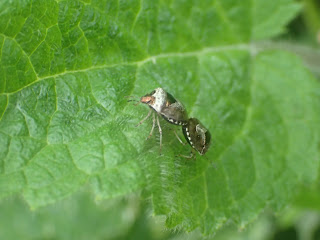