On my way home from work on Wednesday I noticed a Nomada bee on some Spurge. All of the others that I've seen have been the common Nomada goodeniana, but this one looked like it had spots rather than complete bands, so I had high hopes it was a different species. The most obvious alternative species would be Nomada marshamella, but the tegulae (spots at the wing bases) would be orange in that species, whereas the one on this specimen were yellow. Fortunately Tim Strudwick, the county solitary bee recorder, came up with the answer, it was Nomada fulvicornis, so it was a new species, just not the one I thought! 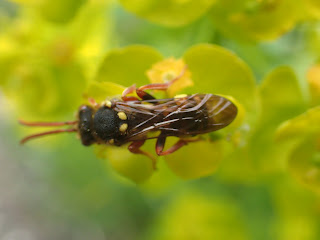 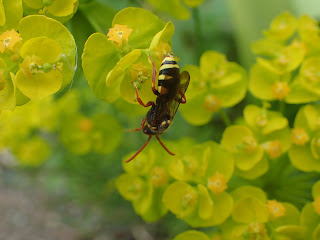