WHITLINGHAM: Hoverflies and other insects

Whitlingham is always busy on hot summer days, so I avoided the majority of the crowds by going down to the woods instead. Having a quick look around the car park I found some Potato Leafhoppers and Wall Speedwell, before heading over to the river. 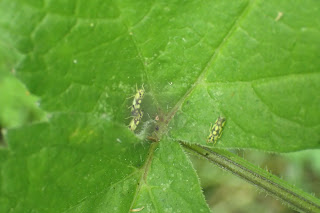 With birdlife rather quiet, my main target for the day was to look for day flying moths and hoverflies, and I started by catching a Platycheirus sp. These can be tricky to ID, but fortunately this was one of only three that have a pointy face, and I was able to confirm later that it was Platycheirus manicatus, a patch tick. Next I scrutinised a sunny patch of Germander Speedwell to look for Little Longhorn moths, but all I could find were some tiny black flies with red eyes (I'm not sure what they are - please leave a comment if you do). I checked quite a lot of Germander Speedwell, all with negative results for the moth. 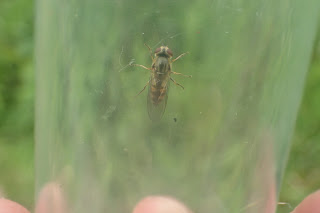 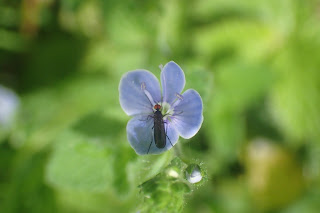 Just before Whitlingham Marsh I diverted down a path with luscious vegetation because I remembered a sandy bank at one end that might hold some solitary bees. It was very light on bees, but very good for Volucella bombylans hoverflies, with both the red-tailed and white-tailed forms. I found a mating pair of the latter, looking odd as the upper hoverfly was flying around dragging the lower one upside down! 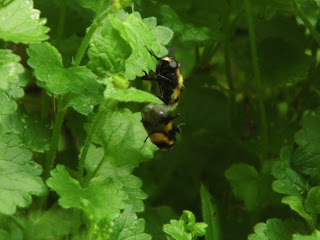 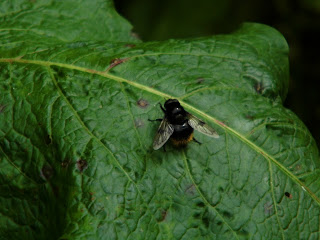 I was keeping an eye out for the hoverfly Dasyrphus venustus that has been seen here by Anne Crotty, but didn't have any luck. I did find some Anasimyia lineata, a new species for me (my sixth new hoverfly of 2017, breaking my target of five new ones). I also put out a pheromone lure to attempt to find White-barred Clearwing. This was purely speculative as it hasn't been recorded here previously, but perhaps no-one has tried before? Either way I didn't see any (I have previously tried to attract Red-tipped Clearwing here too without success), so I'll hopefully get time to try again somewhere else with more success. 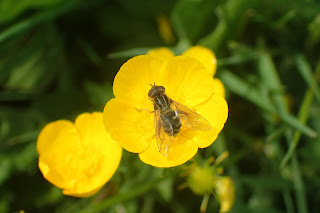