Recently Ricky had been getting some great views of a Grasshopper Warbler at Thorpe Marsh, so I agreed to meet him there on Monday evening. He was running a bit late, which worked well for me as I was able to have a look for moths and beetles in the vegetation along the edge of the dykes. One species of moth was particularly common, although I haven't identified it. Presumably it is something I've seen before - I'll keep working on it. 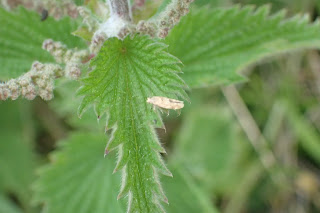 A longhorn moth was easier to identify, it was the Meadow Longhorn, whilst I also saw my first Drinker Moth caterpillar of the year. Of the beetles there were quite a few Donacia simplex reed beetles, but also two new ones, Hydrothassa marginella (seen here photobombing a Donacia) and an odd-looking carabid Demetrias imperialis. 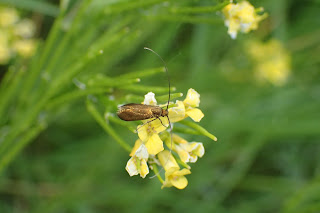 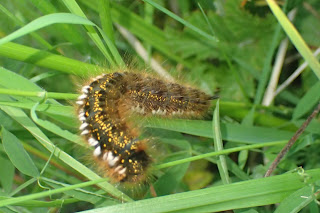 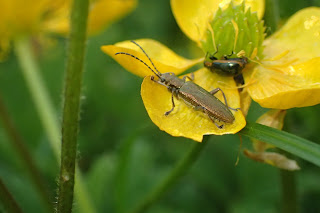 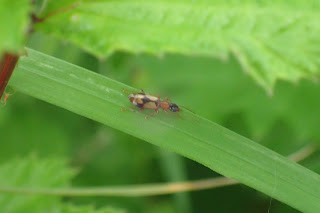 Once Ricky had arrived, along with Matt, Steve and Phil we took a stroll along the path in the direction of a distant reeling Grasshopper Warbler. We then heard a closer one behind us, and returning back a bit we got good views as it reeled from amongst the sedges. As the sun set I was preparing to go when a Hobby flew over us, an excellent end to the evening. 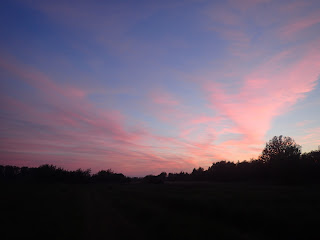 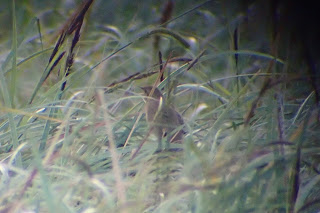