My busy period of wildlife events continued on Sunday with a NNNS Wildflowers Revealed walk in the Tas Valley. Part of the idea was to look at some of the boulder clay specialities of this part of the county, although we were warned in the introduction that not many of these had been found during the recce the week before.

We met in the car park at Forncett St Stephen's church, and after a quick talk and one of Jo's cakes we moved off to have a look in the churchyard. As it happened the first plant we stopped to look at was one I haven't recorded before, Cornsalad. It is relatively common, but also has a number of very similar relatives that differ in the shape of the seeds, which might explain why I'd not felt safe recording it previously. Meadow Saxifrage and Hybrid Bluebell were seen, and some ID tips regarding Hairy Tare ID were given. 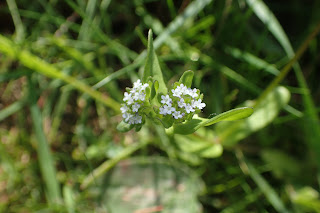 Along the edge of the churchyard we saw Bur Chervil, Rough Chervil, Barren Brome and Great Brome, and I stopped to photograph a micro moth on the hedge. The only comment I've had on it so far is that it looks like Rhyacionia pinivorana, new to me and the 10km square, but if you disagree then let me know! 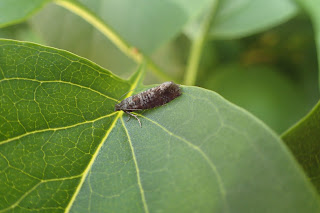 We took a footpath down past a field of buttercups and stopped on a bridge over the river, where Mike waded in to get a sample of a Water Crowfoot sp. These are very similar, and require detailed examination to determine which species is involved. Some dried seedheads of Small Teasel were also of note here. I missed a Small Yellow Underwing moth found by Nick, but did see several species of ladybird and an interesting thin-leaved form of Hogweed. 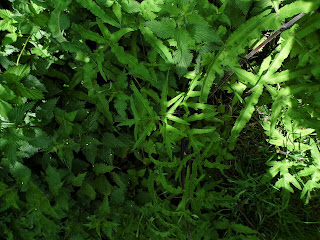 We were now on the Tas Valley Way, which wound its way through a couple of farmyards. As we walked past the first one a few people stopped to look at the horses, an action that made at least one of the inhabitants of the farm surprisingly irate. It was explained to us that they had had lots of rural crime issues here of late, but parties of botanists keeping to the footpath would appear to be rather low on the list of miscreants. After a while we stopped and had lunch, enjoying a nice view across to Forncett St Mary. At this point I decided to leave the rest of the group to it, so after having a chat with Ian and having a look at a 16-spot Ladybird that landed on my leg, I took a different footpath and headed back to the car. 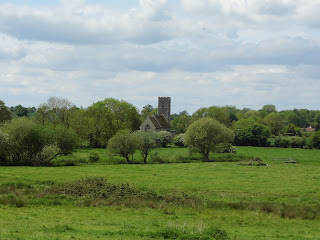 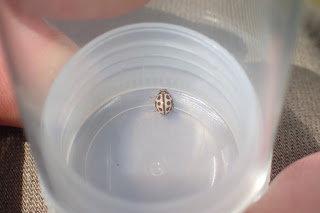