Our afternoon destination was Morston, apparently along with hundreds of others. Most of them seemed content to stay around the quay or head to Blakeney though, so when we took the coast path towards Stiffkey we were soon away from the crowds. I spotted some Sea Wormwood and had a quick look for Scarce Pug caterpillars without success. I'm not sure if they are found this far east, as the distribution is mainly the north-west of the county. 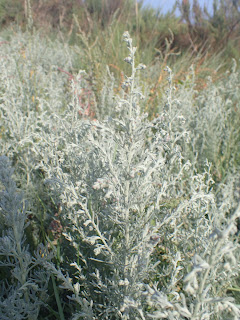 Our target here was Sea Aster Bee (Colletes halophilus), which as its name suggests is an autumn flying bee that specialises in collecting pollen from Sea Aster, a fact that is very useful as otherwise it looks very similar to other members of the genus. To start off we struggled to find any large areas of Sea Aster, but then on the off chance we checked a bit of saltmarsh and found quite a bit in flower. It was mostly the rayless form, and hence had gone overlooked as we were looking for areas of purple. On the yellow flowerheads we found 15-20 Sea Aster Bees, somewhat tricky to photograph but niec nonetheless. This was my 49th bee species - not a spectacular total but double the number I'd seen at the start of the year. 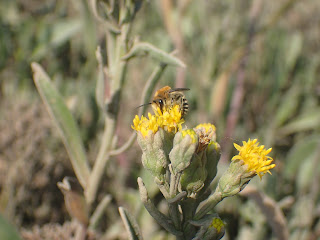 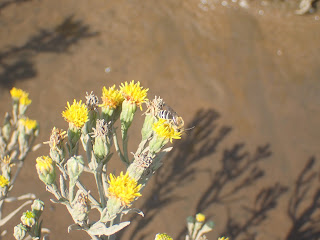 We carried on past the bees to Stiffkey Fen, where we stopped and had lunch. The birds were quite distant, although a flock of 37 Spoonbills stood out. On the way back we paid more attention to the scrub and saw several Stonechats, presumably a family group. 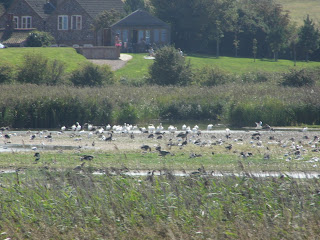 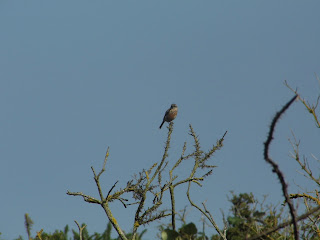 Back at Morston Quay we headed to the toilets and Adam noticed a Frosted Orange moth on the wall. Looking up we realised that there was actually a good range of moths over the ceiling and walls, so once it was empty I quickly moved about and photographed a few. There were more on the outside of the block too. Given the nearby saltmarsh and the coastal location I was hopeful that some of them might be rare, but there was nothing I'd not seen before. Rosy Rustic, Chinese Character and Pale Eggar were some of the scarcer ones. We had a quick look from the observation tower and a tasty sausage roll before leaving. 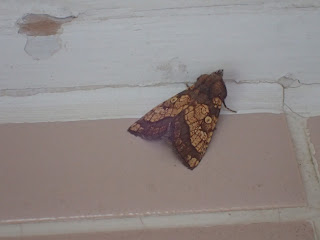 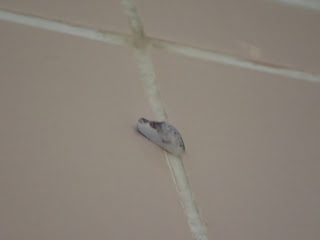 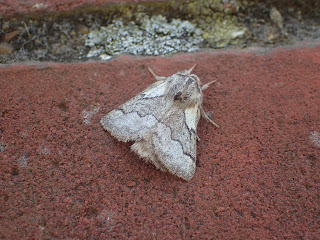