On Friday a White Stork had been reported near Long Stratton, and had apparently gone to roost on a chimney nearby. It was unringed, and had at one point been following a tractor, which struck me as rather wild sounding behaviour. I decided that given this, regardless of its origins (and let's face it, it is almost impossible to prove the origin either way of an unringed bird) I would enjoy seeing it. That is, lest we forget, the reason for endulging in a hobby.

There had been no news regarding the stork on Saturday morning, so I went to have a look for it. A slow drive around a couple of country lanes later and I noticed a field being ploughed, with loads of gulls in attendance. I pulled over and scanned through them without success, but a bit further along I found the White Stork in a grassy field adjoining the ploughed one. Staying in the car so as not to spook it I got good views as it walked about and fed in the grass. The only other people about were a family, I think probably the same ones mentioned in the EDP article. Incidentally I know there are a few slightly questionable details in the article, but it is great that this bird has been discussed at the local school, so well done to the teacher there. Later in the day David and Linda also saw the stork, and David has some better photos of it on his blog here: http://birdsoftheheath.blogspot.co.uk/2017/09/white-stork-surely-this-one-is.html 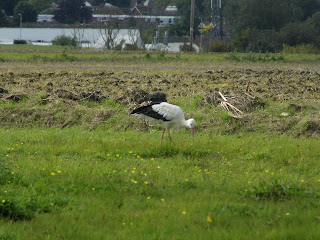 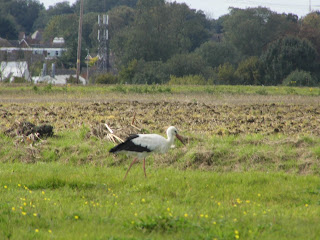 On the way back I was passing a site for Sandy Stiltball, so I stopped nearby and had a look. I only found four fruiting bodies (the site was rather overgrown), most of which were rather old specimens. A check of some Common Mallow nearby revealed one of the specialist weevils that feeds on it, Aspidapion aeneum, so good to end the day with a new species. 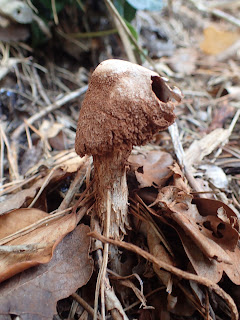 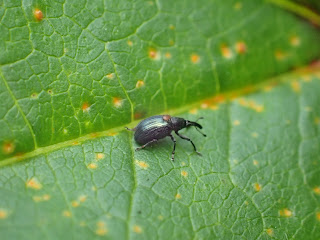