An hour at Whitlingham, and as a singing Chiffchaff was the only bird of note I spent my remaining time checking the trees. One of the first Alders I checked had a brood of late-instar Parent Bugs clustered round in a ball, which was nice to see. 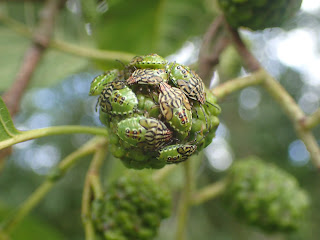 I managed to record three new moths for my patch list, although unfortunately I didn't see any of them as they were all from vacant mines. These were Stigmella tiliae (on Lime), Stigmella lemniscella (on Elm) and Bucculatrix bechsteinella (on Hawthorn). The harvestman Paroligolophus agrestis was one I'd not recorded before, but apparently it is one of if not the commonest harvestman in the UK, so I'm glad I rectified that. The highlight of the walk was a tiny but beautiful chalcid wasp, Ormyrus nitidulus. For scale, it is sitting on half an Oak Knopper Gall. 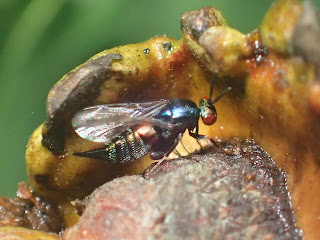