Adam & I had arranged our day out in advance, and had hoped that the last week of August might yield a few migrant birds, but the wind direction had largely out paid to this. Instead we decided to head to the coast but concentrate on bees instead.

Our morning destination was Weybourne Cliffs, where I had heard that there was a colony of Heather Bees (Colletes succinctus) over a thousand strong. My previous experience of this species was of a few skittish bees flying about the heather, so this would be a good chance to observe them closer up. In addition, they were likely to be attended by the cleptoparasitic Red-thighed Epeolus (Epeolus cruciger), a species I'd not seen before (I saw the closely related Black-thighed Epeolus at the start of the month at Titchwell).

Starting off on the top of the cliff, we found some Lasioglossum sp and a few Heather Bees nesting in some sandy outcrops. It soon became evident that the main colony was in an area of sandy cliff, about two-thirds of the way up. The best way to view was evidently from the beach, so we went back down and round. Most of the bees were above head height, but enough came down lower for us to get some good views. 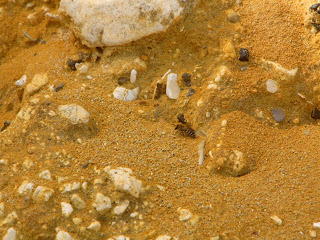 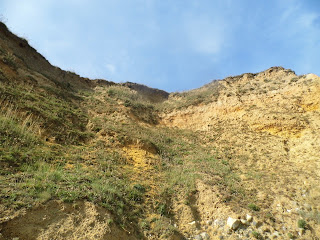 We were successful finding the Red-thighed Epeolus too. As well as finding several males and females, there was a dead one, which allowed for close examination. Given that many bees require close (often microscopic) examination, it was useful to get close up views to compare against the other species in the genus. Adam also located a large beetle, which as I hoped turned out to be one of the coastal specialists, Broschus cephalotes. 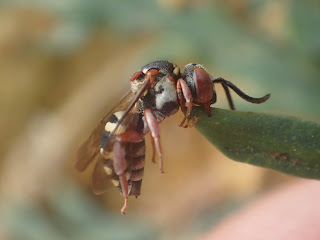 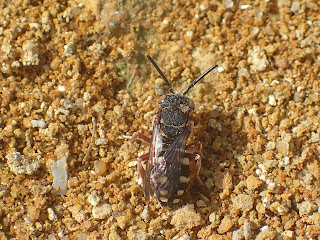 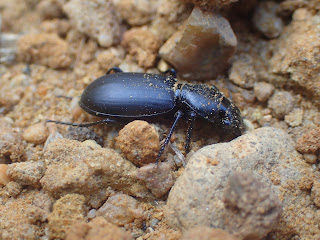 After spending a while at the colony, we moves across to the western cliffs. These seemed to have nothing nesting in them, so we moved on to scanning Weybourne Camp. I remarked that there should at least be a Wheatear about, at which point Adam found one. That was it for migrants though, so we headed back to the car and onwards.