With the winds seemingly not great for migrant birds, and plenty of fungus forays to come, I decided to focus on insects for a bit longer. I was aware of some interesting stuff being recorded at Roman Wood on the edge of Acle recently, including two species I was keen to see (Bishop's Mitre Shieldbug and Rhombic Leatherbug), so I arranged to meet Tim Hodge there to see what we could find.

Roman Wood has a couple of differing compartments, but the area we focused on were recently cut grassland bordered by 20 year old planted trees and bushes. There were plenty of Pestle Puffballs growing around the edges, and the warm sunshine ensured there were quite a few hoverflies around too. 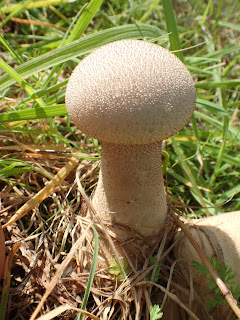 One of the methods of surveying that Tim had been employing at Roman Wood was seiving of the grass piles. I was surprised by the sheer volume of creatures this produced, but many of them were very small. The tiny ladybird Rhyzobia litura was of interest. Nearby a bee bank had been established, and a metallic green Lasioglossum (or possibly Halictus) was inspecting the soil. With no sign of any shieldbugs in the piles we moved on to a bit of sweeping, and this came up trumps with my first Bishop's Mitre Shieldbug. 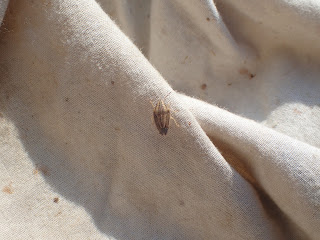 Whilst sitting on the grass a Common Darter landed on me several times, although I had to twist to photograph it. A couple of Agromyzid mines were noted, including a new one for me, Agromyza plantaginis, on Greater Plantain. 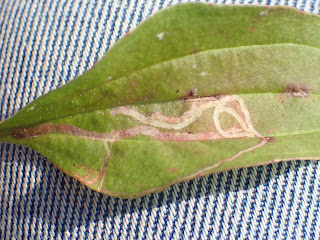 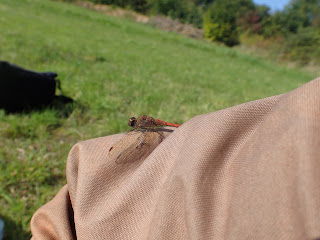 At the eastern edge of the site there is a ditch, and as we headed that way Tim pointed out a Willow Emerald. They really are quite widespread now, I've seen them at many sites this year. A rust fungus on Agrimony was a good find and a few other bits were noted, including some mines in Poplar and Alder. Seiving of one final grass pile turned up two Notiophilus palustris beetles, part of a genus of ground beetles that have large eyes and stalk Springtails. 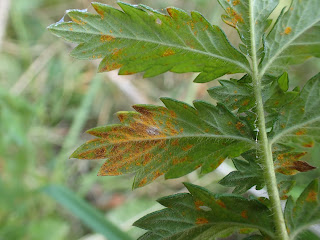 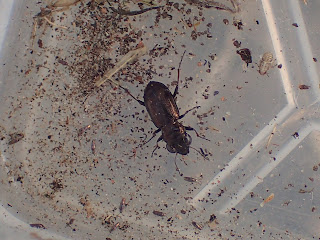