This weekend was WeBS weekend, and as I was busy at the weekend I headed down after work on Friday to get the Whitlingham count done. Yesterdays flock of House Martins was still present (and lower because of the cloudy weather) and a Chiffchaff 'hweeted', but other than a Kingfisher and the Pintard it was all still very sedate. Six Tufted Ducks were visible at Thorpe.

As you can see, the Coot numbers were dramatically down on the 2016 count. My first thought was that the 2016 count might have been near the end of the month, and it was on the 18th, so the ten days will account for some of the difference. Going back further over my data however it seems like numbers do fluctuate considerably during September:

I hung around to check the Cormorant roost, but because of the dull conditions lots were already in the trees, and as the foliage was still present it was impossible to count them accurately - there was at least 27. It began to drizzle, which was followed by a short section of rainbow, which reflected nicely in the water of the Great Broad. I do like a good rainbow. 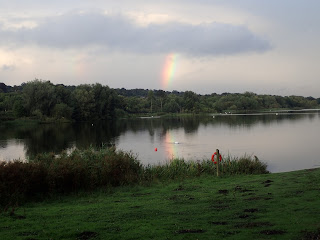