Over the summer I have been aware of a recently formed North Norfolk conservation charity called the Felbeck Trust, who have been restoring and maintaing several sites around Aylmerton and Sustead. One of the people involved is Trevor Williams, chairman of the North-east Norfolk Bird Club and Aylmerton Nature Diary blogger. I had commented on his blog in the past, and he mentioned that the Trust were holding an official opening ceremony at Sustead Common on Saturday if I wanted to come along.

I was aware that there wasn't much parking space nearby, so I arrived a bit early, parked up in the village and walked down the lane to the common. The site was a bit smaller than I was expecting, but this was soon explained - the site had been split into three blocks, and the area currently open is the two smaller areas. A larger part that is mostly composed of deciduous woodland is also now being managed by the trust, who hope to be able to purchase it in the future to reunite the whole common.

Everyone was very friendly, and after a few introductions I set about doing a bit of recording before the ribbon cutting ceremony. I got off to a good start with a Green Tortoise Beetle on one of the deckchairs, and followed this up with Dock Bugs, a Sloe Shieldbug and a Green Shieldbug amongst the Knapweed. In fact it turned out to be a good day for shieldbugs and allied insects, as I found five Hawthorn Shieldbugs in the hedge, a late instar Box Bug and several Woundwort Shieldbugs. 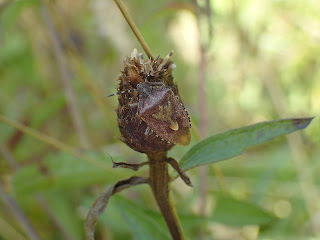 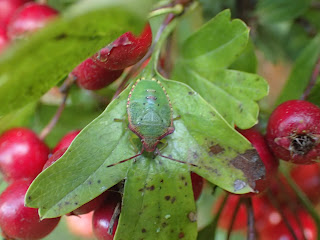 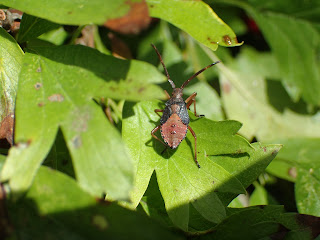 I paused for a bit to listen to the official opening ceremony, and it was pleasing to hear that many groups had contributed to opening up the site. Volunteers had put in over 500 hours, and I spoke to several locals so it seemed that the villagers were also fully onboard with the work going on, which is key when carrying out a project like this.

Across the beck on the 'surveyors allotment' part of the site I picked up a copy of the NENBC bird report for 2015 & 2016 and had a look at what the Norfolk Rivers Trust had caught. As the scrape was currently dry I could walk out onto it and found some flies on the Flag Iris that had been infected by the fungus Entomophthora muscae. I recorded several galls and leaf mines, plus four hoverflies including Chrysogaster solstitialis. 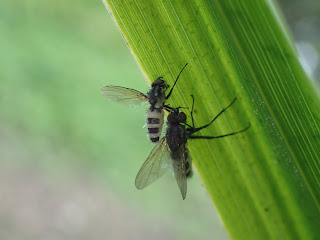 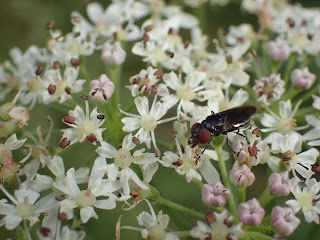 Crossing back to the main part of the common I found a plant bug, Lygus rugulipennis, which I was fortunately able to confirm because my photos were sharp enough to check the hair density on the corium, the only way it can reliably be separated from the four other similar and variable Lygus species. 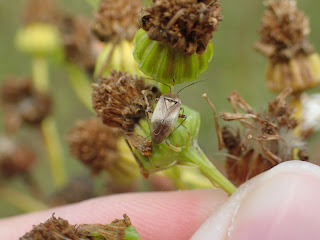 I did stop at this point for cake and tea, although whilst I was waiting for the tea to cool I wandered over to the nearby hedge, where I added a type of Hawthorn mite gall, a Vapourer moth caterpillar and a Comma caterpillar to the day list. 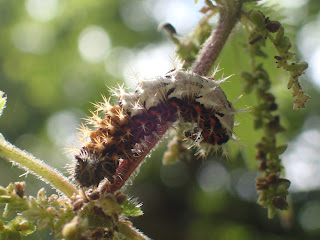 I had a very enjoyable day checking out the site, which I'm sure will only get better as the management work continues, and look forward to visiting again next year at some point.
Posted by James Emerson