Amongst my wildlife interests, butterflies rank highly, so this summer I wanted to see at least one new butterfly species. The easiest one to go for seemed to be Marbled White, not present in Norfolk but common at a site called Devil's Dyke just into Cambridgeshire.

Having driven past miles of racecourses we arrived, only to have a slight unplanned issue, as there was a race event on at the July course and the road that people usually park on was being used. Happily we found a place to park close by, and walked back to the Devil's Dyke. The main path runs along the top of a raised earthwork, with a steep slope down to the main ditch part along the western edge. The tannoy from the racetrack was clearly audible, commentating on races, announcing withdrawals and at one point giving out the latest England score from the Ashes. All of this contributed to a rather idiosyncratic location! 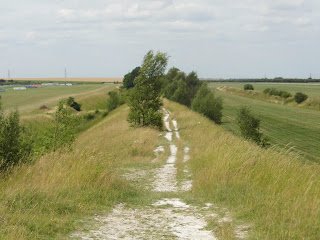 The first butterflies we saw were Chalkhill Blues, and they continued to be the commonest butterfly species all along the stretch we walked. This was an upgrade of sorts, as the only ones I had seen before were at Warham Fort in North Norfolk. Whilst this population now appears to be self-sustaining, it originated from an unauthorised release and there is limited suitable habitat nearby. Crossing over from the first half of this section of the dyke we soon came across our first Marbled White. It was spending most of the time at the bottom of the dyke, so I carefully walked down and tracked it and another one nearby. Despite the windy conditions I managed to get some photos, and noted that one of them had a red parisitic mite on it. 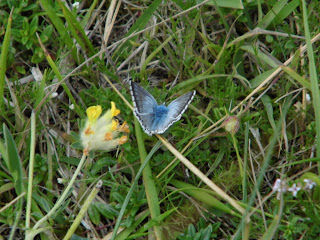 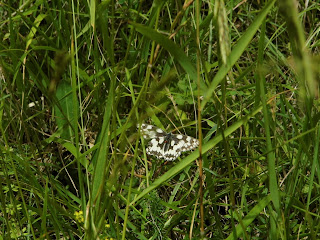 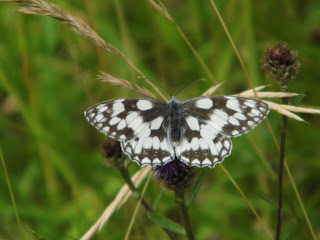 We spent a while watching the Marbled Whites, which looked excellent and had a very pleasing fluttery flight. Heading back along the path I noticed some bright yellow chrysalises (I'm not convinced that is the correct plural!) on Knapweed stems, which I think belong to Six-spot Burnet Moths. A Hawthorn Shieldbug landed on my back, and Cathy noticed a Bloody-nosed Beetle walking across in front of us. We enjoyed our walk along this stretch of the dyke, and a couple photographing butterflies suggested trying the stretch near Reach, so perhaps we will try that another year. 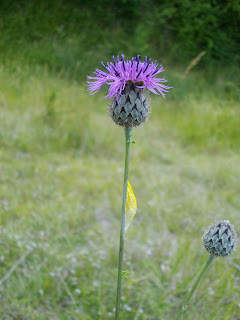 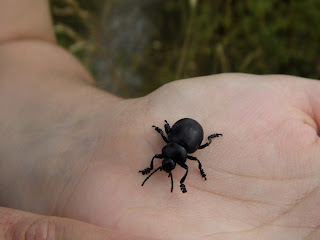